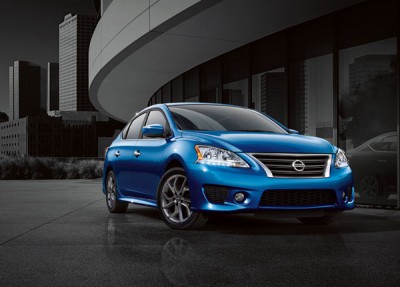 What’s New for the 2013 Nissan Sentra

The Nissan Sentra is completely designed for the 2013 model year with a roomier interior, better fuel efficiency, and a new electronics interface. The SE-R and SE-R Spec V models are also now discontinued.

For the 2013 Sentra, Nissan takes traditional sedan styling and turns it on its head, incorporating bolder, swooping body lines and a modern styled grille in the Sentra’s new redesign. The little details, such as a slight curve of the headlamps, add character to the sedan,  making it more appealing than ever before.

A 1.8-liter four-cylinder engine powers each 2013 Sentra, generating 130 horsepower and 128 lb-ft of torque with a standard six-speed manual transmission on the base model. All other Sentra models come standard with a continuously variable transmission (CVT)

EPA-estimated fuel economy for Sentra models with a CVT is 34 mpg combined.

Quality materials and a modern design create a feeling of elegance within the newly revamped Sentra cabin, particularly in the SL trim, which features beautiful wood-tone accents and an abundance of soft-touch materials. NissanConnects makes sure the driver remains connected at all times with its 5.8-inch touchscreen and ability to stream either Pandora or Bluetooth audio. One of the most appealing aspects of the sedan, though, is its roominess. All seat, both back and front, have an abundant amount of legroom, making the Sentra one of the most spacious cars in its class.