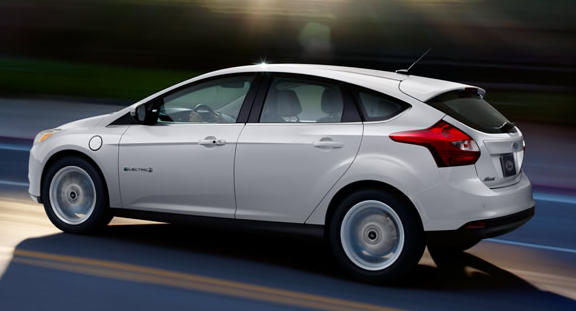 The 2014 Ford Focus Electric makes a good thing even better.

The 2014 Ford Focus Electric is sporty compact, created to target a younger car-buying demographic through sleek exterior styling. The Electric variant of the 2014 Focus builds on that with exclusive xenon headlamps and LED tail lamps that deliver even more aggressive curb appeal as standard equipment.

The 2014 Ford Focus electric is powered by a 107-kilowatt driver motor paired with a 23-kilowatt lithium-ion battery, which combines to produce 143 horsepower, allowing the 2014 Focus Electric to travel from 0-60 mph in 9.6 seconds.

Because the 2014 Ford Focus Electric doesn’t require gasoline, the EPA rated it in MPGe (miles per gallon equivalent). The 2014 Focus Electric returns 110 MPGe city and 99 MPGe highway, and has a range of about 76 miles. The Focus Electric can be recharged in just four hours.

In order to lure young car-buyers, the 2014 Ford Focus Electric has been loaded with technology, including the MyFord Touch infotainment system with SYNC. The intuitive features integrates with drivers’ smarthphones and gives them access to all their favorite entertainment through voice recognition commands and an available eight-inch touchscreen display.

The 2014 Ford Focus Electric boasts all the standard safety features drivers have come to expect, including stability control and advanced airbags, but there are also some available features not as common to the compact segment, such as parallel park assist, which practically parks the Focus Electric itself, and a rearview camera.

Brought to you by Ukiah Ford of Ukiah, CA.