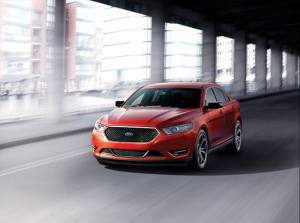 The 2014 Ford Taurus looks to make a big impact this year with some sophisticated upgrades.

The front grille on the 2014 Ford Taurus is a more elegant form of that found on the Fusion, and it sets the tone for a vehicle that rivals even the most stalwart of luxury nameplates. The sculpted lines of the 2014 Ford Taurus, are bold, not sleek, and meant to attract a more sophisticated car-buyer.

The 2014 Ford Taurus is powered by a standard 3.5-liter V6 that generates 288 horsepower and 254 lb-ft of torque, but that is just the tip of the performance iceberg when talking about the Taurus. The 2014 Ford Taurus SHO is an elite performance model powered by a twin-turbocharged V6 that pumps out 365 horsepower and 350 lb-ft of torque, which propels the Taurus SHO from 0-60 mph in just 5.8 seconds.

Fuel economy for the 2014 Ford Taurus’ base V6 comes in at 18 mpg city and 26 mpg highway, but drivers can opt for the turbocharged 2.0-liter four-cylinder engine and see those numbers rise to 22 mpg city and 32 mpg highway. The high-performing Taurus SHO returns 25 mpg highway.

Ford made sure that the luxury feel of the 2014 Taurus didn’t end when you entered the vehicle. The 2014 Ford Taurus offers amenities previously found in luxury sedans, such as multi-contour front seats with built-in massager and heated rear seats. The Ford MyTouch system allows drivers to connect with their favorite entertainment on their smartphone through the massive touchscreen.

Standard safety features on the 2014 Ford Taurus include side curtain and front seat side-impact airbags, integrated blind spot mirrors, stability and traction control, and antilock disc brakes. A rearview camera and rear parking sensors are also available, along with a slew of pre-collision warning technology.