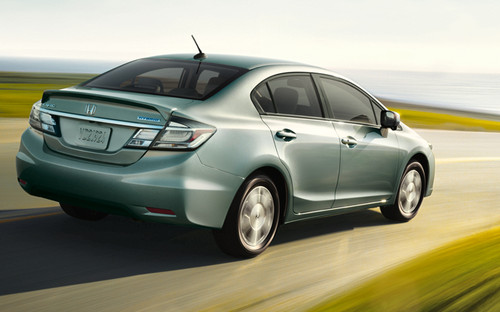 The 2014 Honda Civic Hybrid has received a bit of a tweak to its powertrain, giving it better fuel economy than last year. Also, it features a few new features, such as a larger touchscreen display and enhanced smartphone integration.

Usually, those shopping for hybrids have to sacrifice exterior style to get the fuel economy they want. This is definitely not the case with the 2014 Civic Hybrid, which combines sporty accents and sleek styling to create an efficient, yet sexy silhouette that you can’t help but love.

The hybrid powertrain combines a 1.5-liter gasoline four-cylinder engine with an electric motor and a lithium-ion battery pack, churning out a decent 110 horsepower and 127 lb-ft of torque. A CVT is standard, allowing the hybrid to reach 60 mph from a standstill in 10.1 seconds.

Tweaks to the Civic Hybrid’s powertrain have increased the EPA-estimated fuel economy a bit to 45 mpg combined.

Quality materials and premium-looking surfaces combine with a two-tier, driver-oriented dashboard design that allows both drivers and passengers to stay connected. Leg- and headroom is plentiful, allowing passengers of any size to fit comfortably, even in the rear seats. Because of the battery back, though, trunk space is limited to only 10.7 cubic feet.