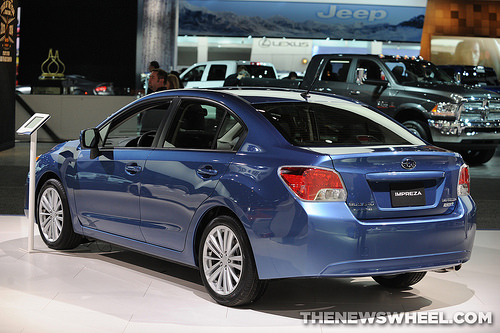 What’s New for the 2014 Subaru Impreza

The 2014 Subaru Impreza keeps the styling that loyal Subaru fans have fallen in love with, but certain advanced technology will now come standard on the Limited trim, including a rearview camera and smartphone app integration.

A lot of nameplates are undergoing drastic redesigns, but Subaru is sticking to its guns with the 2014 Impreza. This is especially true of the 2014 Subaru Impreza hatchback whose styling is unmistakable, especially when outfitted with the sporty hood scoop.

Subaru has employed only one engine to power the 2014 Impreza – a capable 2.0-liter boxer four-cylinder engine. The versatile boxer engine generates 148 horsepower and 145 lb-ft of torque.

The 2014 Subaru Impreza’s four-cylinder was engineered for efficiency, and is able to return 27 mpg city and 36 mpg highway. Also notable is that those number don’t fluctuate depending on whether drivers opt for manual or automatic transmissions.

Edmunds.com describes the interior of the 2014 Subaru Impreza as “clean, time-tested and high-quality.” Technology is far from lacking in the 2014 Impreza, as Subaru offers a navigation system, rearview camera, voice recognition commands, and smartphone integration, just to name a few.

The 2014 Impreza builds on Subaru’s reputation as one of the most reliable and safe vehicles on the market through a slew of advanced safety features, including stability and traction control, a suite of intuitive airbags, antilock brakes, and many more.