2015 GAS Mustang Previewed Ahead of SEMA 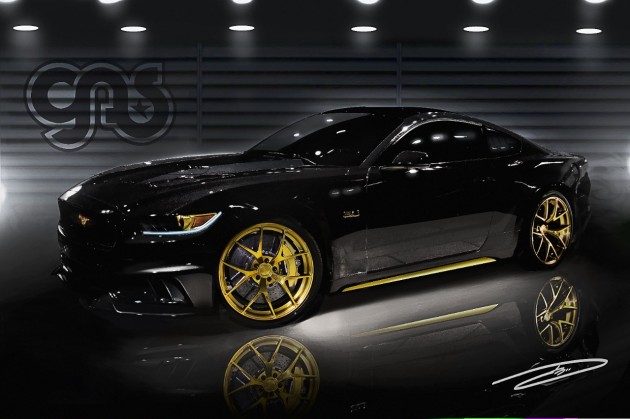 The 2014 SEMA Show is gearing up, and Ford figures to make the Mustang a centerpiece in its 50th year. During the annual specialty equipment show—which caters largely to aftermarket tuners—Ford will be showcasing more than a dozen customized versions of its 2015 Mustang. Today, we get a sneak peak at the 2015 GAS Mustang.

More on the Ford Mustang: Mustang 50th Anniversary Celebrated with Release of 2015 Model

Naturally, GAS isn’t some kind of indication of digestive problems. It’s Galpin Auto Sports, who have taken the 2015 Mustang and gussied it up with a 50th anniversary-appropriate gold theme.

The 2015 GAS Mustang is largely blacked out, but it’s the gold highlights that make it stand apart. The 20” wheels, side sills, brake calipers, and the famous pony emblem are all gilded. But Galpin didn’t stop there: the paint scheme, despite appearing black, is actually filled with metallic gold flecks.

Further, the engine—the trusty 5.0-liter Coyote V8—has been powder-coated for a gold appearance. To make sure that it’s adequately displayed, the 2015 GAS Mustang has a glass window built into the hood so that anyone can see the engine.

“We like the black and gold idea, and really wanted to get the color as close to 24-carat gold as possible,” said Brandon Boeckmann, GAS operations manager.

Speaking of the engine, there’s more to it than looks: Galpin kicks the Coyote’s power up a notch or two with a gold-coated Whipple supercharger that improves output to 725 horsepower.

There’s plenty more where that came from, and the 2014 SEMA Show may well belong to the Mustang. Stay tuned for more on Ford’s other SEMA offerings.