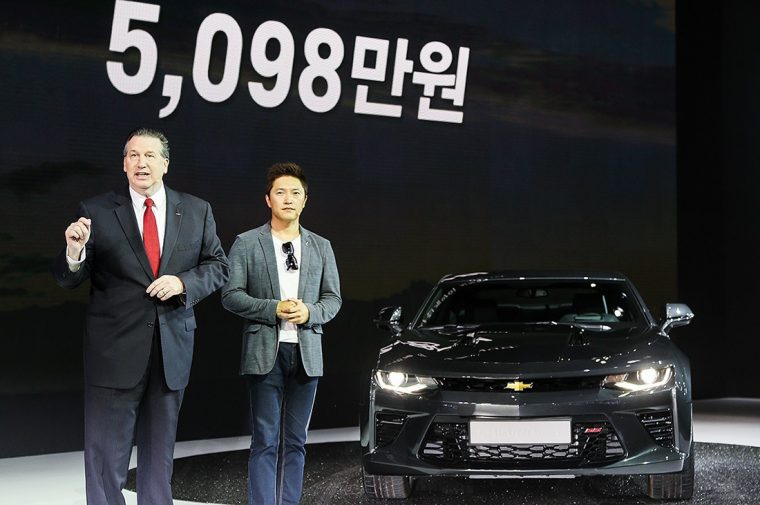 Chevrolet brought a bit of excitement to the Korean peninsula this month when it revealed the award-winning 2016 Camaro SS at the 2016 Busan International Motor Show.  The effortlessly powerful 6.2-liter V8 beneath the hood of the Camaro SS is SAE certified at 455 horsepower and 455 lb-ft of torque, and it is sure to become a highly coveted choice for Koreans looking to live life in the fast lane.

Customers looking to get their hands on the Camaro SS will be able to plunk down their orders today, with sales officially opening up on June 2nd. The Camaro SS retails for KRW 50.98 million.

“The Camaro represents the spirit, technology and identity of the Chevrolet brand for an uncountable number of fans,” said GM Korea President and CEO James Kim. “It has returned to Korea with an even more powerful performance and sophisticated design. It will especially please those who have been waiting for a true performance model from Chevrolet.”

The new Camaro SS is available with Magnetic Ride Control, which makes for smoother performance by way of an ability to read road conditions 1,000 time per second and adjusting the damper setting accordingly.

The new Camaro SS is built on a new, lightweight platform that makes it 90 kilograms lighter than the previous-gen model and supports a lower and wider stance that promotes better aerodynamics.

On the (award-winning) inside, the Camaro SS gets a new center console and center stack that continues the idea of efficiency in performance, with features including air and heating controls built into rings encompassing the air ducts themselves. Also on the inside, the Camaro SS gets the first-ever LED ambient lighting system for its segment, a feature which is adjustable through the new Drive Mode Selector.