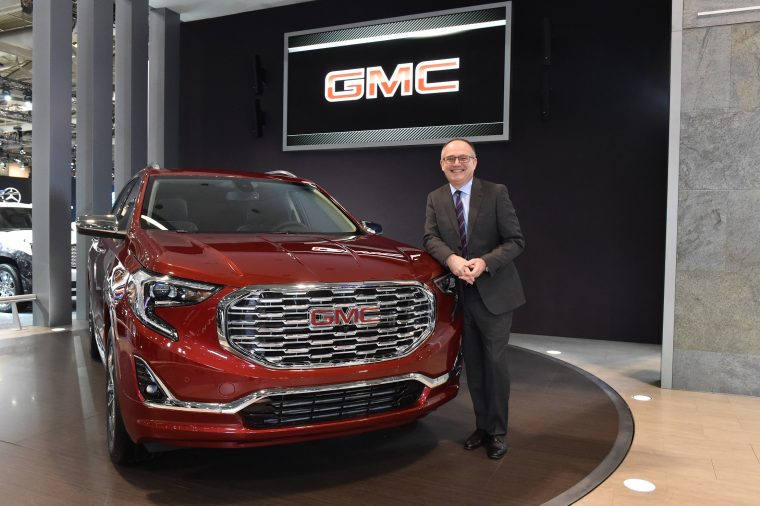 Earlier this year, GMC revealed its 2018 Terrain for the world; this month, the next-generation Terrain makes its Canadian debut at the 2017 Canadian International Auto Show. The new Terrain is not only bolder aesthetically than the previous-gen model, but it will also feature a new powertrain lineup that includes a 1.6-liter turbo-diesel.

“Canadian customers are drawn to the premium nature of our professional grade products and the 2018 Terrain offers them the widest range of choices yet,” said Mike Speranzini, brand director, GMC Canada. “The all-new Terrain delivers bold design, capability, and precision to the fastest growing segment in the market.”

Available beginning this summer, the 2018 GMC Terrain will be offered in SLE, SLT, and Denali models. Apart from a sharp new look, the highlight of the next-generation upgrade is the move to three new turbocharged engine offerings. The 2018 Terrain will be the only SUV in its segment to be offered with new 1.5-liter and 2.0-liter turbocharged engines mated to GM’s new nine-speed automatic transmission. The Terrain will also be offered with a new 1.6-liter turbo-diesel, making it even more versatile than ever before.

Other new highlights with the 2018 Terrain include Electronic Precision Shift, which does away with the conventional shifter in favor of electronically-controlled shifting, as well as new fold-flat front passenger and rear seats. The new Terrain will also be offered with GM’s Rear Seat Reminder and Teen Driver technology, aimed at reminding parents to check the backseat before exiting the vehicle and allowing them to monitor the driving habits of their teenaged children, respectively.