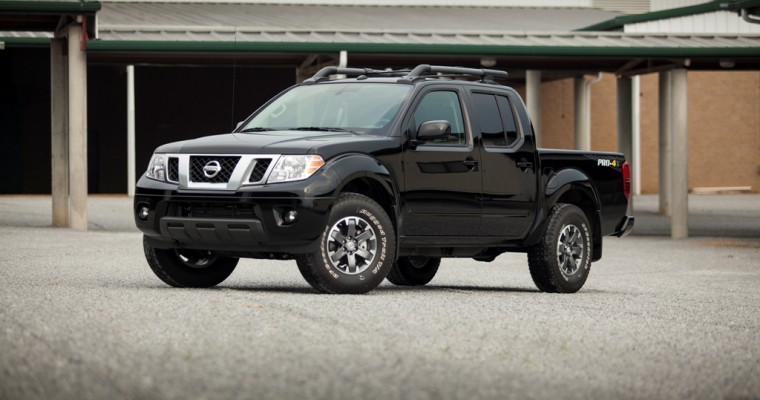 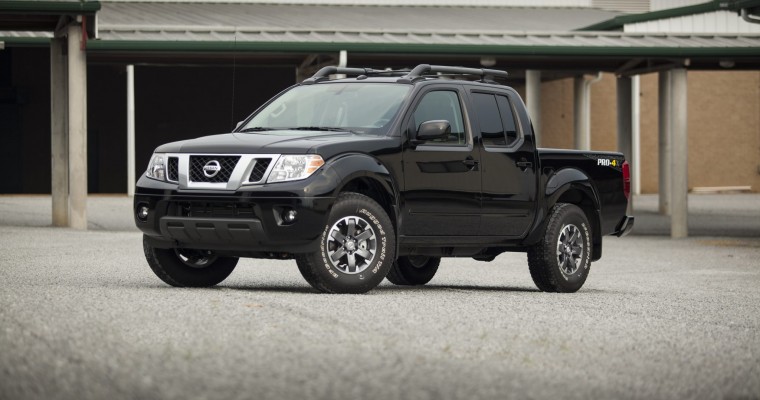 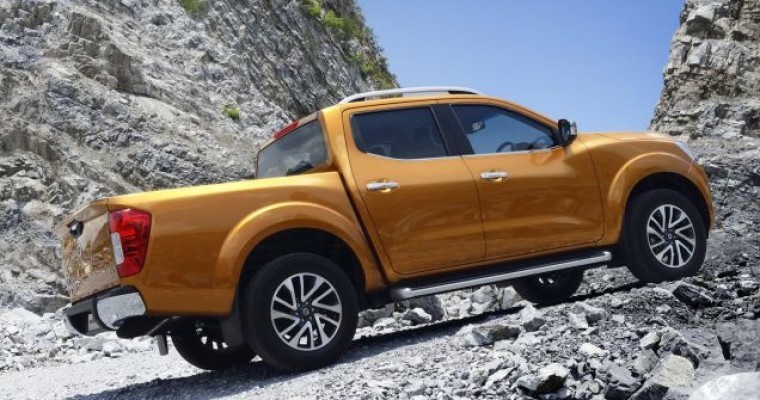 Nissan teased a new pickup truck last week, and we all mused whether it was a Frontier or a Titan beneath the sheet. We thought, oh, it can’t be a Titan because they don’t sell those outside of North America and surely Nissan wouldn’t be teasing a truck that they won’t be marketing prominently in the United States. […]

The Next Nissan Frontier Could Ride on a Mitsubishi Truck Platform 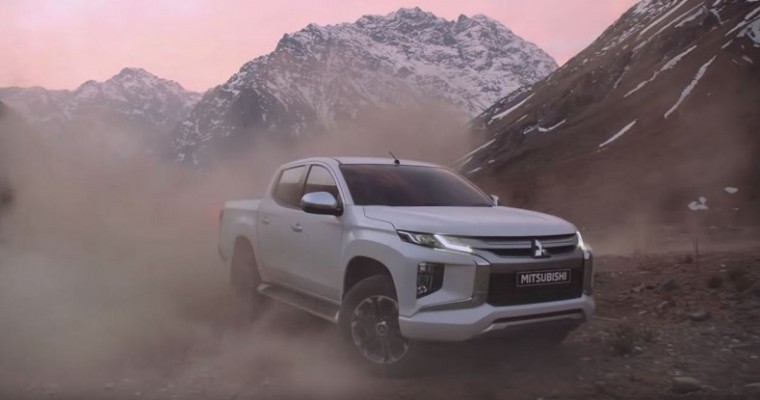 With Mitsubishi working on a new platform for the Renault-Nissan-Mitsubishi Alliance, Nissan's U.S.-based Frontier could be due for an upgrade

As far as the Renault-Nissan-Mitsubishi alliance is concerned, Nissan mainly deals with the pickup segment for the U.S. Yet, a new rumor suggests that the Nissan brand may be turning to Mitsubishi in its development of new trucks. Said rumor states that the next Nissan Frontier might utilize the Mitsubishi Triton’s architecture. Advice for Purchasing […] 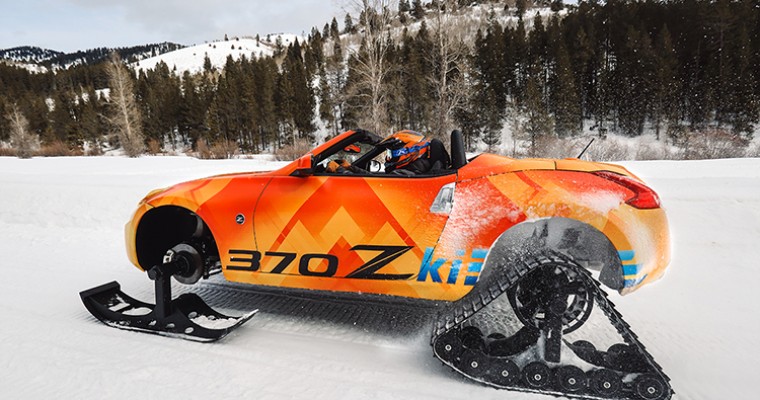 You don’t have to venture out into the cold to appreciate two custom project vehicles from Nissan currently on display at the 2018 Chicago Auto Show because Nissan has brought the “cold” inside. Designed to tackle winter’s worst conditions, Nissan’s 370Zki and Armada Snow Patrol project vehicles are on display and taking on flurries in […]

Nissan Xterra Might Be Returning, But Not How You Remember It 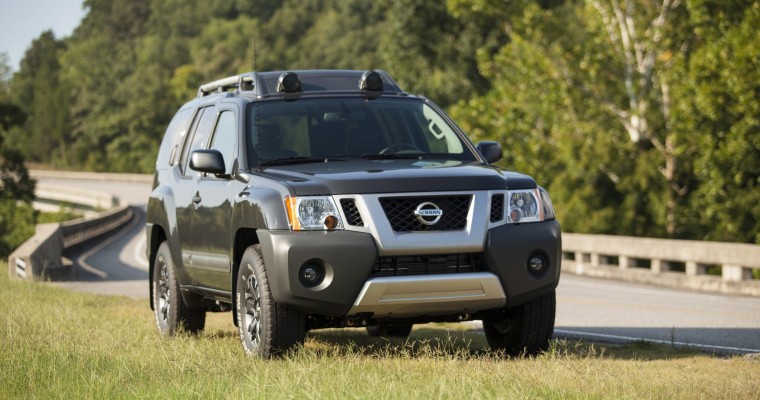 The Xterra put up a valiant fight before Nissan discontinued it in 2015, as its steadily declining sales resulted from poor fuel economy and safety compared to its class competitors. It was a wise decision by the automaker to retire the crossover that, though once was an award-winning model, had failed to meet ever-changing customer demands. […] 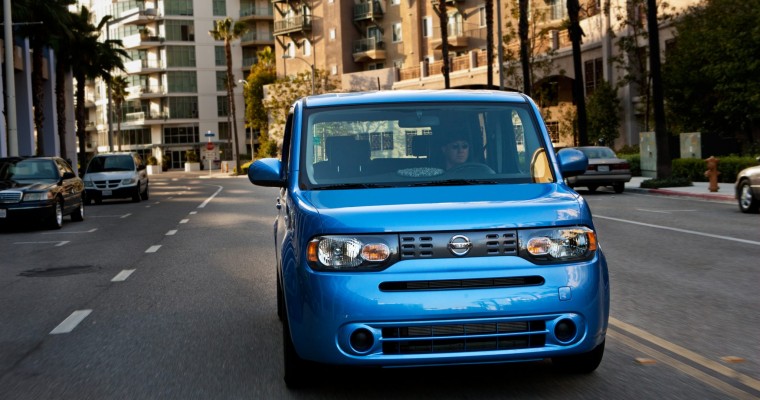 Nissan cars are popular around the world, from its home country of Japan to here in the United States. Like every mainstream automaker, Nissan has seen its fair share of discontinued models over the years—some that are sorely missed, others that we were relieved to say goodbye to. Here are three discontinued Nissan models whose […] 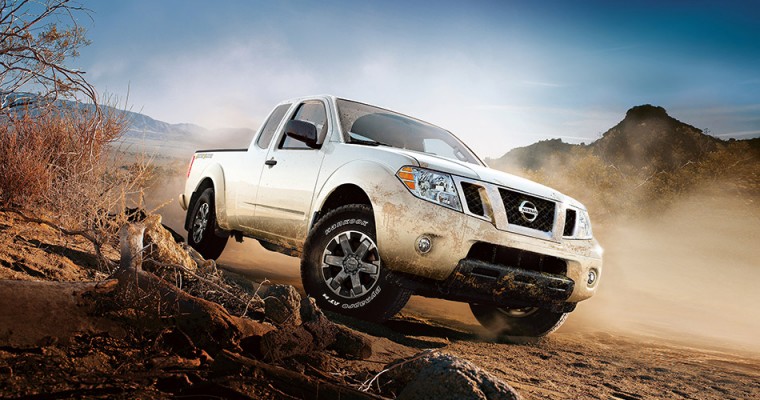 The next generation Nissan Frontier is finally coming, and while we don’t know what it looks like or what features it has, Nissan announced this month that it will definitely be built at its Canton, Mississippi, facility. This confirms that the Canton plant will be the home of Nissan’s truck manufacturing in North America for […]

Are We Finally Getting a New Nissan Frontier? 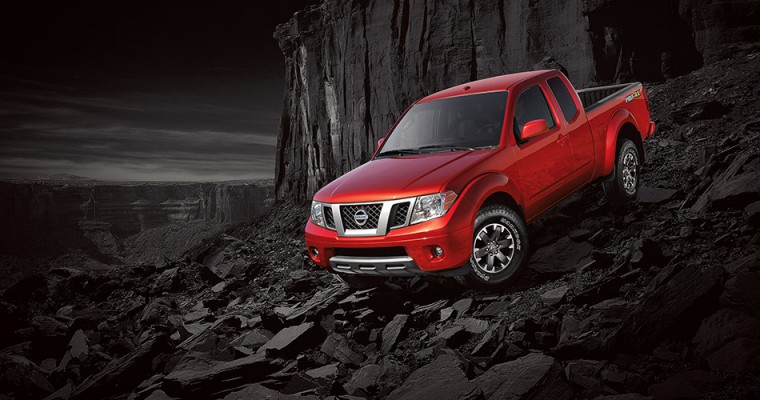 Nissan has really been pushing its trucks for the last few years with last year’s “Year of the Truck” and recent redesigns for the Nissan Titan and Nissan Titan XD to make them look more like American vehicles. However, the Japanese automaker has left one of its trucks in the dust, the small Nissan Frontier. […]

Nissan Frontier Gets A Price Tag 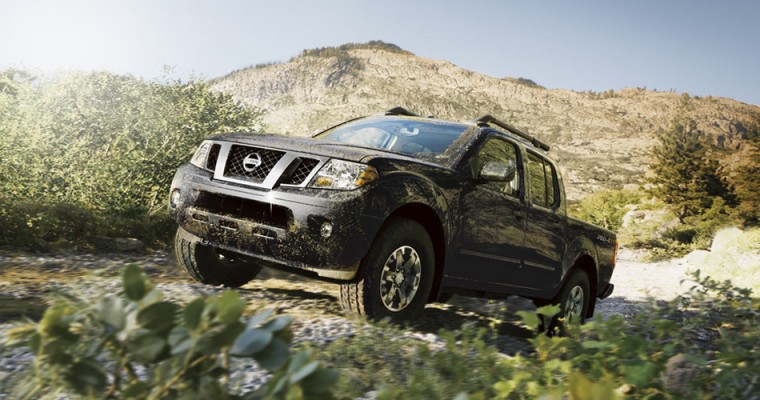 With the Nissan Titan and Nissan Titan XD getting bigger and better to fight competitors, shoppers will be relieved to know that there is still a smaller pickup truck option from Nissan. The 2017 Nissan Frontier is getting ready to roll out nationwide, and so we finally have a starting price for it. Be Observant: Learn […] 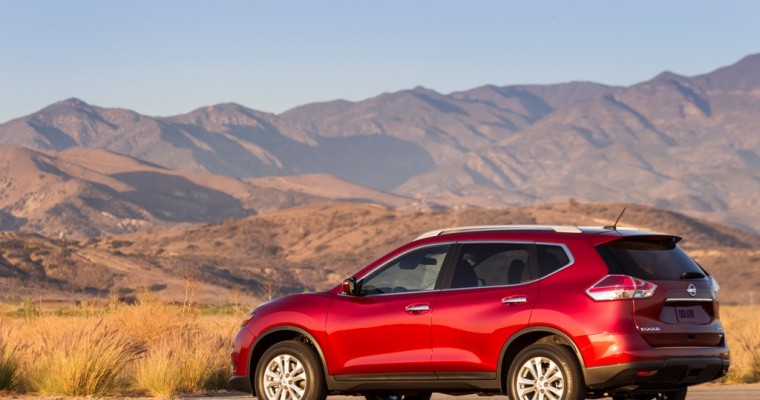 Nissan Group announced total sales of 132,475 units in the United States last month, setting a new July record with a 1.2% year-over-year increase. Nissan Division sales were up 1.7% with 122,530 units delivered versus 120,439 units from July 2015, also a new record for the month of July. Nissan Division truck, utility, and van […]

It Is Now Nissan’s Year Of The Truck 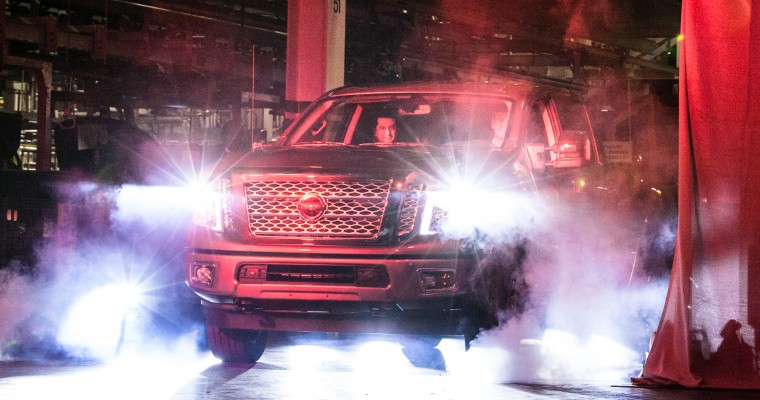 The truck segment of America’s auto market is fiercely competitive, and is traditionally seen to be dominated by three main players: Ford, Chevrolet, and Ram. This year, Nissan is working hard to carve out its own place and gain a larger piece of the sales pie. To give a name to its efforts, the Japanese […]

The JD Power Initial Quality Study, or IQS, examines buyers’ reactions to their new car purchase, focusing on the first ninety days of ownership. The survey issued as part of IQS asks owners about problems they had with the vehicle, from things that are minor annoyances to those which disable a car and require it […] 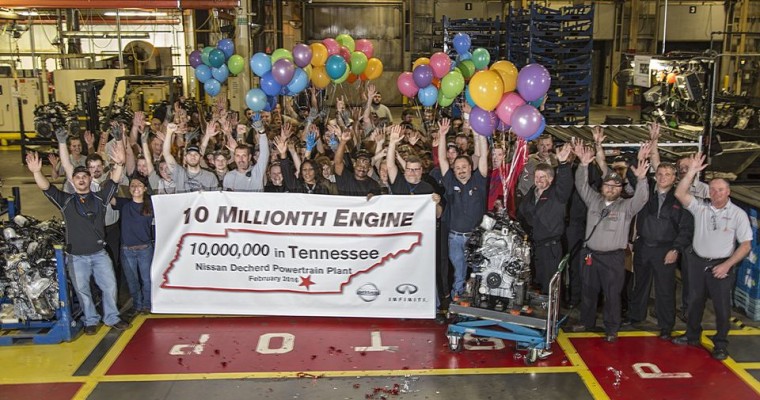 Nissan is committed to building vehicles in the USA, with four plants building new cars in the state of Tennessee, in addition to the design center in California and the technical office in Michigan.  According to the automaker, a new engine is built at its Decherd Powertrain Plant every 19 seconds, and the hard work is […] 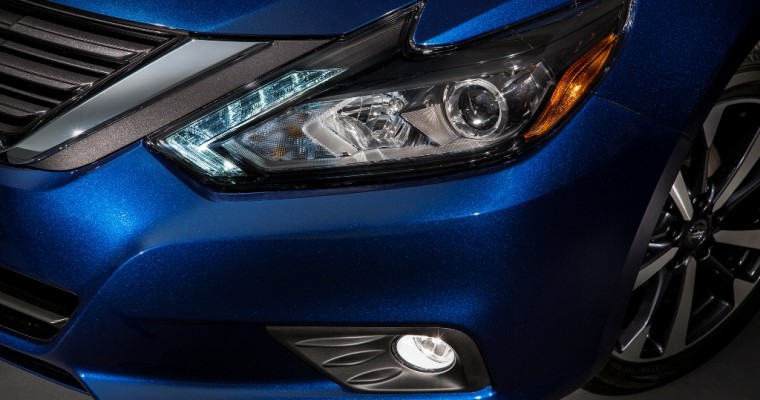 Nearly every automaker provide colors with unique names; Nissan is not an exception to that trend. We generally like to think of colors as blue, red, or green, but with Nissan, you’ll get all of the “Metallic,” “Sapphire,” and “Midnight” variants as well. Below, you’ll find some of the best exterior colors offered by Nissan for the […]

Nissan has officially begun production of its much-hyped, much-awarded full-size pickup truck, the TITAN XD. In a ceremony at the Canton, Mississippi assembly facility, Nissan executive vice president José Muñoz said, “It has been a long, hard journey getting to today and I want to express my appreciation to the entire TITAN XD team. And […]

The 2016 Nissan Frontier is the automaker’s mid-size workhorse, built for rugged use on and off the road with a brawny V6 engine (or slightly less brawny four-cylinder). Although the 2016 model year is a carryover from the previous year with few changes, the Frontier remains one of a strong choice for those wanting a […] 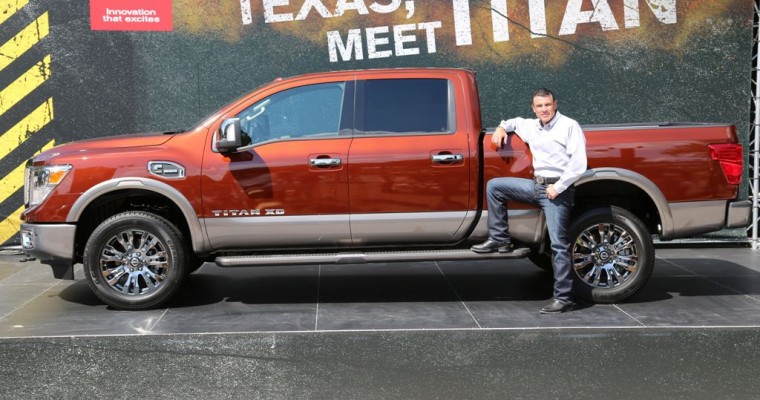 The 2016 Nissan TITAN XD full-size pickup is a huge machine. Just look at the thing: So, with such a huge truck to show off, Nissan decided that the best possible place to take it to show off, of course, was Texas. However, Nissan didn’t show up just anywhere—it went right to the world-famous State […]