An Orchestra of Audis Plays Homage to Television 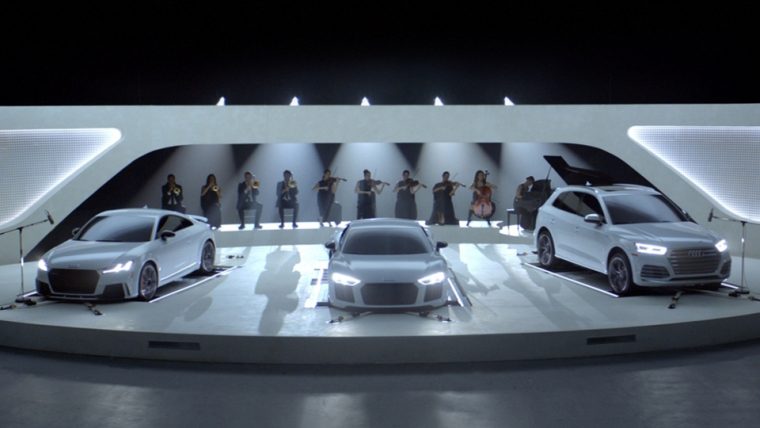 This past Sunday night, the glittering stars of the TV world assembled in Los Angeles to celebrate the best shows of the past year at the 69th Emmy Awards. While everyone else was checking their at-home ballots against the actual winners and debating whether Alexander Skarsgård can rock a blond mustache, we were watching the latest commercials from Audi. This year the luxury brand returned for the seventh consecutive ceremony as its automotive sponsor, which means that it got plenty of prime slots for commercials (among other perks).

The Final Frontier: Learn more about Audi’s mission to the moon

Each of the three commercials featured the Audi R8 V10 plus, Audi TT RS, and Audi SQ5 vehicles on a platform with a small orchestra. From there, the cars played three of TV’s most popular theme songs with the traditional instruments with their different pitched engine noises. From The Mary Tyler Moore Show, to Cheers, and Star Trek, the songs were recognizable and the sounds kind of blended with the musical accompaniment. The commercials looked fresh and well-executed, but we wondered if they might have gone over better with some more recent TV themes.

“Over the last several years, the wide array of captivating television programming has re-engaged America, so we wanted to celebrate the progressive role television plays in our culture as the automotive sponsor of the 69th Emmy® Awards,” said Loren Angelo, Vice President, Marketing, Audi of America. “The annual Emmy® Awards are a recognition of the power of television. ‘Audi Orchestra’ pays tribute to three of television’s most memorable shows with an interpretation of each theme song uniquely performed by the engines of our Audi products.”

Better Safe Than Sorry: Check out what you should do in case of a recall

Hopefully sometime soon Audi will show us exactly how they whipped its engines into orchestra shape.