Autocross Racer Takes Adorable Mom Out for a Spin 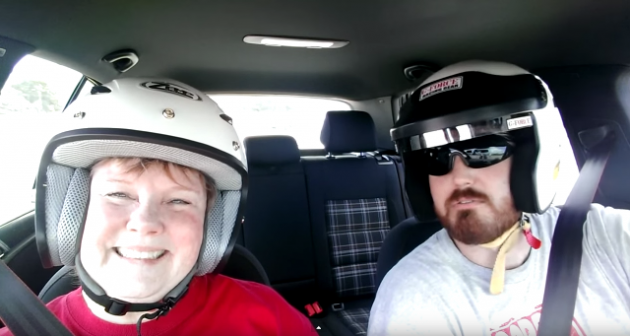 Look at that smile! Scott’s mom is obviously enjoying her mother-son bonding time

If you’re looking for a great way to spend more time with your mom, then why not take her out on your next autocross excursion? That’s exactly what Scott, an autocrosser, recently did. In his girlfriend’s borrowed 2014 GTI, no less.

Related: Tips for Driving in the Rain

Originally, Scott wasn’t planning on taking his mom with him—or racing in his girlfriend’s Volkswagen GTI. Turns out, he actually tore his modified Subaru Forester‘s CV boot, making it impossible for him to drive it, unless he wanted to race a car with no grease in the CV joint.

Scott’s mom shows off her spicy side when he first takes off, starting off the ride with a nice, juicy expletive. She then begins making some rather hilarious and adorable noises, squealing in excitement when he takes turns. It just makes you want to join her in the kitchen and bake some cookies.

When Scott’s time is announced, his mom is duly impressed, having the ultimate “mom” moment of pride, though he might have done a bit better in a Mitsubishi Evo. After the father-son bonding we witnessed earlier this week, it seems like everyone and their mother—literally—is taking a joy ride in some fast cars.

Related: How to Figure Out Which Side Your Gas Tank is On