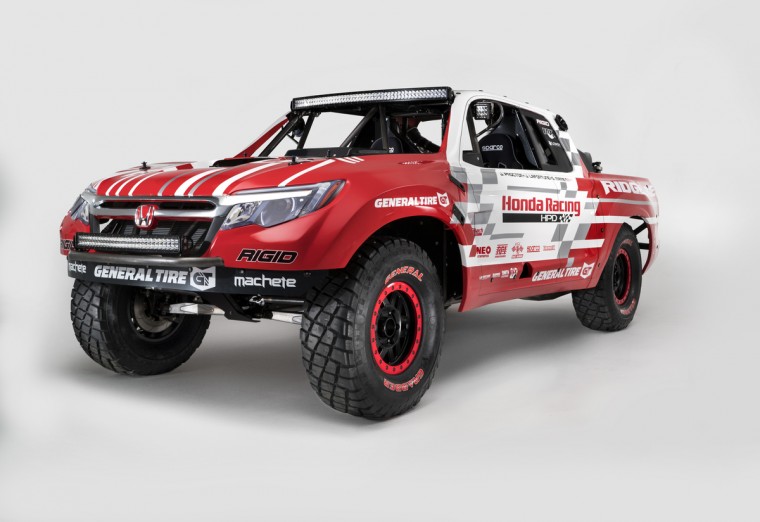 Honda has used the 2015 SEMA Show in Las Vegas as a venue for debuting its Ridgeline Baja Race Truck, which marks the automaker’s return to off-road truck racing. Even if you’re not a fan of motorsports, though, this racing pickup may still interest you, as it hints at what the next-generation 2017 Honda Ridgeline model will eventually look like.

Decked out in red, white, and black Honda Racing livery, the Honda Ridgeline Baja Race Truck will be packing a 550-horsepower twin-turbo V6 engine when it competes at this year’s running of the SCORE Baja 1000. You can bet a better view of the Baja’s powertrain in this new video from Honda Racing:

The 2017 Honda Ridgeline, which is set to premiere in the first half of next year, will not look as aggressive as this off-roading beast, but Honda says that the vehicle’s “front fascia, hood, roof, bed, and side profile” all feature elements that will likely reappear in the production model. As expected, that means we can expect a more conventional pickup from the Japanese automaker, and one which ditches those weird dual-sloping buttresses.

“We’re happy to share some of the high-level styling direction for Ridgeline and to celebrate this desert race truck that signals the return of HPD power to Baja,” said Art St. Cyr, president of Honda Performance Development. “While this race truck is unique and different from the production Ridgeline, it does a nice job of expressing not only our styling direction but also the fact that the Ridgeline, for all its unique qualities, has been and will continue to be a pickup with true truck capability.”

The all-new, second-generation Ridgeline will be introduced in the first half of next year, and will be followed by the launch of a completely redesigned Odyssey minivan in the second half of 2016.