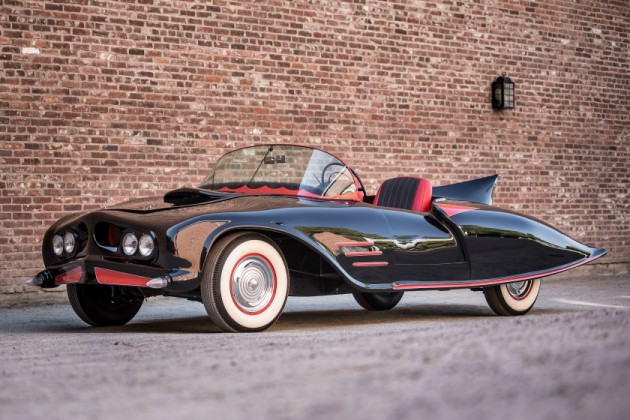 You can get this classic licensed Batmobile when it goes up for auction!
Photo: Heritage Auctions

If you’ve ever pretended to be Batman, chances are you didn’t imagine yourself as any of the vintage iterations of the caped crusader. It is more fun to make Christian Bale impressions, after all.

But, for those who read the original DC comics in the 1940’s and 1950’s, a once-in-a-lifetime opportunity has arrived to re-live those glory days.

The earliest DC-licensed Batmobile has returned after decades of neglect to be fully restored and auctioned off by Heritage Auctions.

If you want a piece of Americana history, you’d better act fast. Bidding on the Batmobile closes on December 6th!

The vehicle isn’t based on the 1966 Adam West television series, if that’s what you’re thinking (although you can finally watch that on DVD!).

Instead, this edition began its unique customization in 1960, enduring three years of hard labor before becoming the first touring Batmobile in existence. “This is from before replicas of the Barris TV Batmobile were made and available for touring,” said Margaret Barrett, Director of Entertainment and Music at Heritage Auctions. “Those were known as ‘ABC TV Batmobiles,’ and later on as the Barris Batmobile or 1966 Batmobile.”

The design for the Batmobile was actually based on the DC Comics’ version of the car from the original Batman comics.

A pre-Batman-ized 1956 Oldsmobile 88. Not nearly as good for fighting crime!
Photo: Wikipedia

It began as an 1956 Oldsmobile 88 with 324 Rocket engine before enduring three years of dedicated customization, as commissioned by DC Comics licensee All Star Diaries. Debuting in 1963, two years before the television show began, it’s purported to be the earliest custom car in existence.

The history of the vehicle took a tragic turn when it was retired in 1966 and sold for less than $200, ending up abandoned in a New Hampshire field for decades. It wasn’t until a local discovered the Batmobile that its rebirth began.

Like the phoenix rising from its ashes, the Batmobile rose from the dirt to be sold online for restoration. The vehicle has retained all its original parts–including the frame and engine.

You can find the fully-restored crime-fighting vehicle on Heritage Auction’s website. Although the opening bid is $90,000, some speculate the final tally will exceed $500,000. You can even bid from the convenience of your own basement–with internet bidding opening November 29th and ending December 5th at 8pm.

You’ll just have to supply your own superhero costume if you win the bidding!