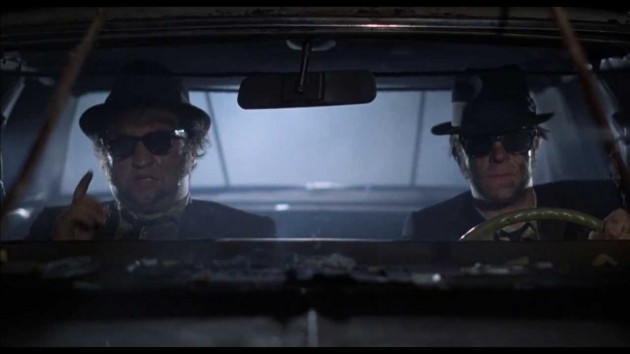 Elwood: “It’s 106 miles to Chicago, we got a full tank of gas, half a pack of cigarettes, it’s dark, and we’re wearing sunglasses.” Jake: “Hit it.”

If you watch all of the films that are based on Saturday Night Live sketches, you will notice some definite tiers that emerge. Many entries are abysmal (including It’s Pat and A Night at the Roxbury), some are underrated (Stuart Saves His Family and Coneheads) and a select few are beloved (Wayne’s World). There is really only one, though, that has ever transcended its small screen roots and truly become a cinematic classic in its own right.

I’m talking, of course, about The Blues Brothers, an iconic 1980 comedy based on the musical sketches that fellow cast members Dan Aykroyd and John Belushi performed on SNL. Jake and Elwood Blues’ wild road trip all over the state of Illinois (and especially the city of Chicago) has become the stuff of movie legend, which is somewhat remarkable, when you think about it. 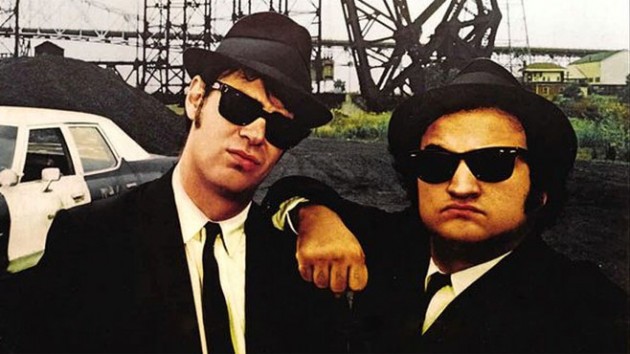 The film has an incredibly simplistic plot stretched to a running time that exceeds two hours, and is essentially a glorified vanity project: two white guys who don’t play any instruments putting on matching suits and pretending to be the incarnation of black R&B music (Aykroyd was born in Ontario, for God’s sake!).

And yet, despite all of the reasons that this movie shouldn’t work, it does. A lot of credit for that should probably go to director and co-writer John Landis (who was coming off the success of 1978’s Animal House), co-writer and star Dan Aykroyd, and of course, the late John Belushi.

The film opens with convicted thief Jake Blues (John Belushi) being released from prison and picked up by his brother Elwood (Dan Aykroyd), who is driving their new “Bluesmobile,” an old beat-up cop car that he bought at a police auction.

The two drive to the orphanage where they were raised in Calumet City, Illinois, to visit “the penguin,” Sister Mary Stigmata. The nun regretfully informs them that the orphanage will be closed unless they can pay the $5,000 in taxes that they owe the city. The brothers resolve to get the money (legally, this time) to save the orphanage, calling their mandate “a mission from God.” 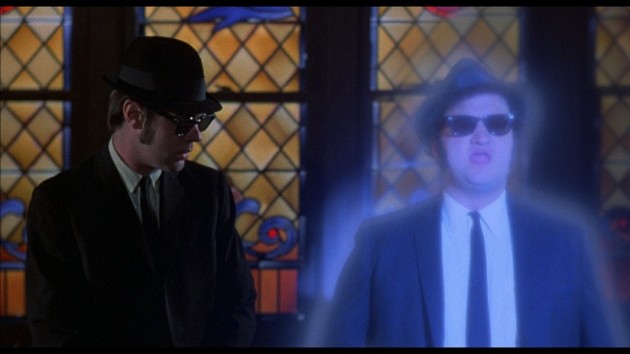 After reconnecting with the orphanage’s janitor Curtis (played by Cab Calloway), who acted as a surrogate father for the boys, Jake and Elwood visit a spirited church service being led by Reverend Cleophus James (James Brown). It is here that Jake sees the light and is divinely inspired to get the band back together.

The rest of the film is devoted to the boys’ efforts to reunite their old rhythm and blues band for a gig that will earn them the necessary $5,000, while being hotly pursued by the various groups they manage to piss off. Chief among them is the Illinois State Police, who the Blues Brothers lead through a shopping mall during a classic car chase scene. There’s also the Illinois Nazis, who are offended when the brothers run them off a bridge during a rally. And, of course, they’re being followed by the Good Ole Boys, a country and western music band who they impersonated at a dive bar. Oh, and there is also a mysterious woman (played by Carrie Fisher) who keeps trying to kill them, and is eventually revealed to be the girl Jake left standing at the altar. 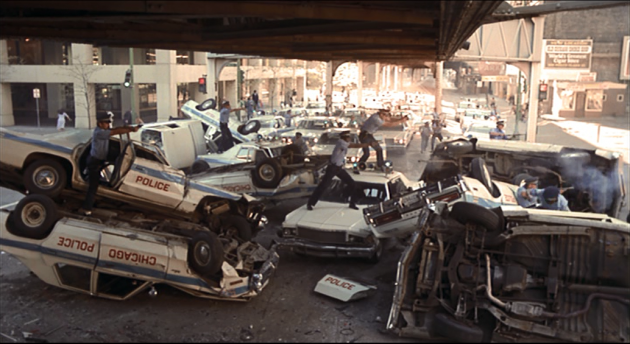 Mayhem beneath the L-Train

Everything comes to a head in the climax, when Jake and Elwood race through the city of Chicago with hundreds of state troopers on their tail and go crashing into the Richard J. Daley Center to pay off the orphanage’s taxes. Seconds after they get their receipt from the Cook County Assessor (played by Steven Spielberg), they are handcuffed and placed in custody. The film ends with the band back together and back in prison, performing “Jailhouse Rock” for their fellow inmates. 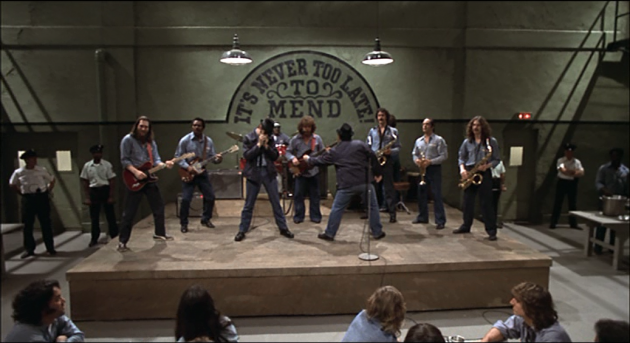 There are hundreds of cars in this movie, and most of them get gleefully thrown around as if they were a child’s set of Hot Wheels toys.

The most notable of these many cars is, of course, the Bluesmobile, a 1974 Dodge Monaco sedan. Elwood says that the Monaco is an old Mount Prospect police cruiser, and he describes its specs thusly: “It’s got a cop motor, a 440-cubic-inch plant. It’s got cop tires, cop suspension, cop shocks. It’s a model made before catalytic converters so it’ll run good on regular gas.” 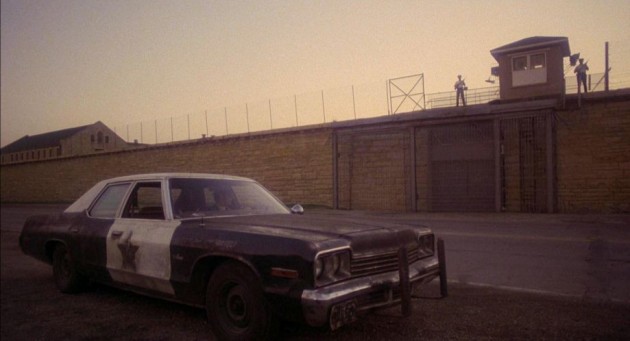 The Bluesmobile: a 1974 Dodge Monaco sedan

Jake makes reference to the fact that the original Bluesmobile was a Caddy (specifically a 1968 Cadillac Fleetwood, according to the script), but the new Dodge Bluesmobile proves its worthiness by performing cartoonish stunts throughout the film that include bridge jumping, performing backwards flips, and seemingly flying. (In the extended version, a deleted scene reveals that the car has special physics-defying powers because Elwood parks it where the L-Train’s high voltage transformers are housed).

Another car of note is the 1977 Ford Pinto Wagon, which the Illinois Nazis drive to their death when the Blues Brothers trick them into accidentally driving off an uncompleted bridge. 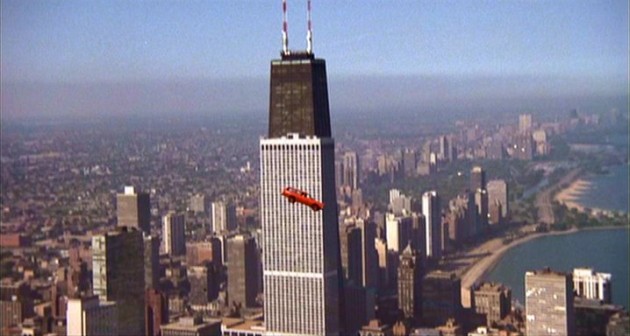 A 1977 Ford Pinto, failing in its first attempt at flight

103 cars were wrecked during the making of this film (a world record at the time), and the majority of them were 1977 Dodge Royal Monacos, which is what most of the Illinois State Police and Chicago Police Department cruisers are. 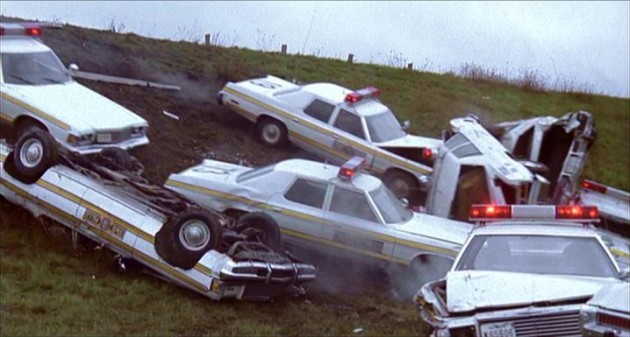 If you’ve ever wondered what happened to all of the world’s 1977 Dodge Royal Monacos, it was this

This is a great film for car enthusiasts (or, at least, car crash enthusiasts), as automotive mayhem is present throughout and becomes absolutely explosive in the finale.

Our The Blues Brothers Review

Despite being pursued by half the state of Illinois, the Blues Brothers manage to defy both gravity and the odds and save the orphanage. The reason for their supernatural success, according to Elwood’s mantra, is that they’re “on a mission from God.”

The film itself seems to be similarly blessed. Even though it’s a contrived and self-indulgent musical act stretched to over two hours in length, The Blues Brothers is miraculously perfect as a movie. The characters, the gags, the ridiculous story, and the songs all just work. 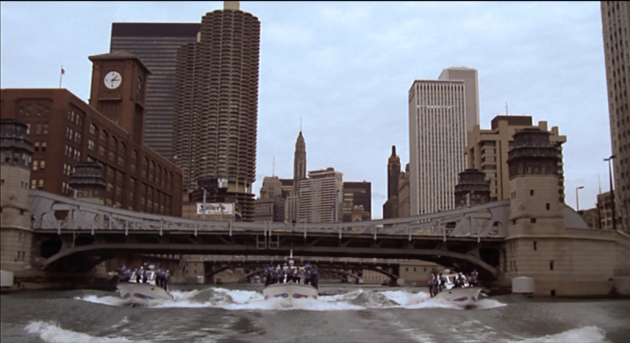 A shot of the Chicago River, as the Coast Guard is called in to catch Jake and Elwood

Credit should also be given to the city of Chicago, which in itself is a character. Sure, there are the requisite shots of Wrigley and the Chicago River, but it’s more than just that. The Blues Brothers (and all of their pursuers) run wild on our nation’s third most populous city, and the results are delightful. It’s pretty incredible to watch the Bluesmobile actually go 118 mph underneath the L-Train, or see it really crash into Daley Center – not to mention the inexplicable joy inherent in the sight of a Ford Pinto falling to its death with the skyline of the Windy City as its backdrop.

In spite of everything, the Blues Brothers somehow made the transition to the big screen perfectly. Then, eighteen years later, they tempted fate and tried it again with Blues Brothers 2000. That time, the fates weren’t on their side…