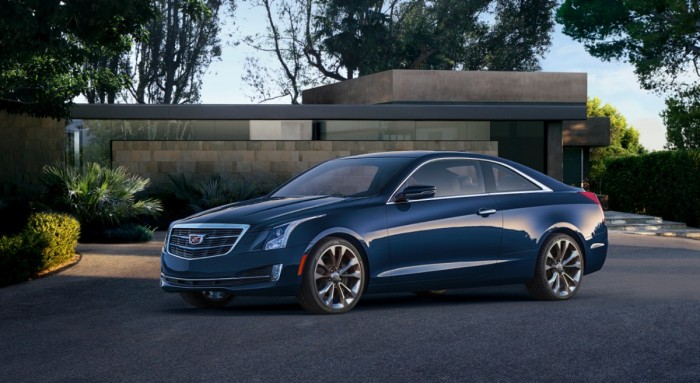 If you’re anything like us you’re no doubt excited by last week’s reveal of the 2015 Cadillac ATS Coupe at the 2014 NAIAS.  Couple that with the knowledge that the ATS will be one of the first to receive OnStar 4G LTE and a built in Wi-Fi hotspot—as GM announced at CES the week prior to Detroit—and you’ve got all the more reason to be pumped for the arrival of Caddy’s next coupe.

Announced through a press release, GM states that OnStar 4G LTE in the 2015 ATS Coupe will include a complimentary five year OnStar Basic Plan.  Services of OnStar Basic include OnStar Vehicle Diagnostics email, Dealer Maintenance Notification, and RemoteLink Key Fob Services (which can also be accessed through an app available through iOS, Android, Blackberry, and Windows mobile services).

OnStar 4G LTE in the 2015 ATS Coupe can also be used to enhance the driver’s CUE Collection experience.  CUE Collection is the new in-car app marketplace that will be arriving in Cadillac vehicles later in 2014, allowing users to download apps directly to their CUE infotainment systems and subsequently organize, update, and delete as they go.  The lineup of apps that will be made available upon launch includes Priceline.com, The Weather Channel, NPR, and Glympse among others.

You can expect to experience OnStar 4G LTE in the 2015 ATS Coupe when it arrives at dealerships this summer.  Until then, stay tuned to The News Wheel for all the latest updates on GM and Cadillac’s latest newsworthy moves!