We might not quite live in the same world as George and Jane Jetson, but we’re getting closer all the time. Chevy has just announced its Camaro Z/28 Performance Traction Management (PTM) system that, if only for a second, creates a “flying car.” 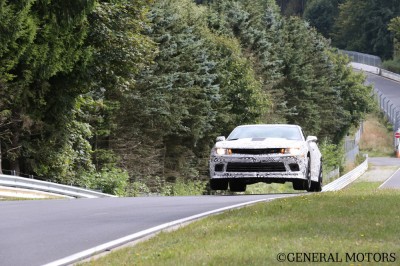 This system, which is only available for track use, creates faster lap times by maintaining full power for the Camaro—even if the tires lose contact with the track for a short amount of time (hence the “flying car” buzz). The driver activates the PTM system via a button in the center console, allowing for the system to integrate the chassis mode selection and the Traction Control and Active Handling Systems.

He went on, “The unique logic in the system uses the ride-height sensors to determine the reduction in force on the tires that’s unique to track driving and allows the car to continue with uninterrupted momentum and, ultimately, a better lap time.”

It was with the PTM system that the Camaro Z/28 was able to obtain its impressive 7:37 lap time at Nürburgring, beating out the Porsche 911 Carrera S and the Lamborghini Murcielago LP640. The Camaro Z/28 Performance Traction Management technology actually came into play during a rise in the Flugplatz section of the infamous track.

The Camaro Z/28 PTM features five performance levels; each level is geared toward specific driving conditions. It is in Mode 5 that the “flying car” logic is at its most effective, although it can be used in all five modes.