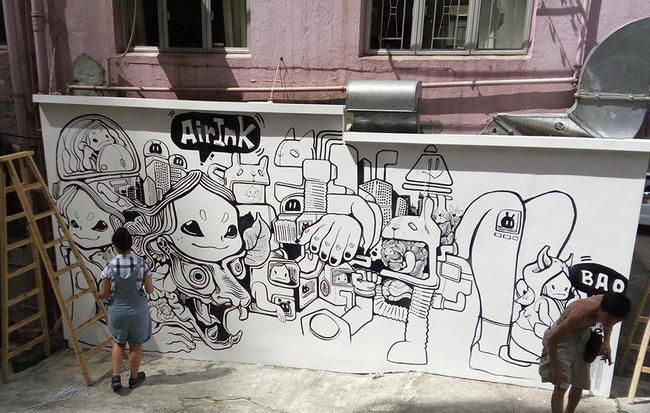 Exhaust fumes are an unlikely source for something artistic. But with some innovative thinking, exhaust fumes−namely the soot in the fumes−are fueling works of art.

According to RodalesOrganicLife.com writer Gina Tomaine, upon a visit to India, MIT graduate Anirudh Sharma noticed that the amount of pollution from cars “was so heavy that it was leaving black flecks on his white shirt.”

Fueled by this realization, Sharma, along with a team of collaborators and his colleague Nikhil Kaushik, created the tech startup Graviky Labs in India.

“[The team] launched a kickstarter to fund their prototype ‘Air-INK’— turning carbon pollution into ink using a trademarked system they named ‘Kaalink. The team’s Kaalink unit hooks up to a car’s exhaust pipe, or even a chimney or generator, and captures 95 percent of the pollution created, without creating any back pressure or damaging the device,” reports Tomaine. “The soot that the Kaalink unit captures includes the fine black particles, chiefly composed of carbon produced by incomplete combustion of fossil fuel. By mixing the black powder with solvents, they are able to produce ink in bottles and markers.”

According to Tomaine, the ink that the team collects into bottles and markers has made its way into the hands of artists all over the world, who were asked by the team to “create outdoor murals to raise people’s awareness about pollution—and the possibilities for combating it with technology.”

The result of this pollution-using artistic endeavor is astounding. Tomaine reports that Graviky Labs has already “captured 1.6 billion micrograms of particulate matter, which equates to cleaning 1.6 trillion liters of outdoor air.”