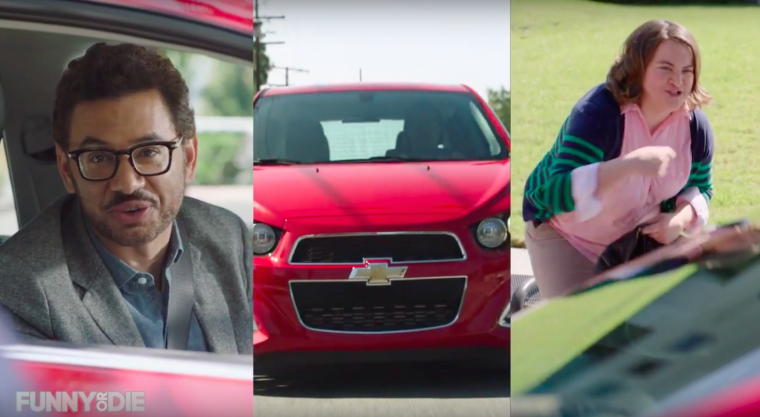 Chevy has quietly launched a small marketing campaign to promote its lineup of small cars, including the Sonic, Spark, and Trax. As part of the campaign, Daily Show correspondent Al Madrigal stars in #SmallTalk, a YouTube video series that the bowtie brand debuted yesterday.

Ostensibly a parody of talk shows, the first four-minute episode features the usual chat-show format, except with every aspect having been made smaller. The setting (a Chevy Sonic) is small, the runtime is small, the guests are small, and the laughs are really small.

It’s all pretty “meh,” but I’m predicting Chevy will release at least two more episodes—one set in a Spark and one set in a Trax.

Those interested can find more exclusive content at the website www.chevysmallcars.com. There you will find a “mini mixtape” composed of three songs, a special (and pretty good) Chevy-sponsored episode of the Judge John Hodgman podcast, and an unplugged version of the song “Anxious Love” by The Kickstand Band performed inside a Sonic.

The website also lets users customize the look of their preferred Chevy small car—not just by picking the exterior color, but by outfitting it with things like bunny ears, googly eyes, and Groucho Marx glasses.

So if putting Groucho Marx glasses on a Chevy Sonic is your idea of a fun time, then by all means, check it out, man. Kind of sounds like your Saturday isn’t going that great so far, though.