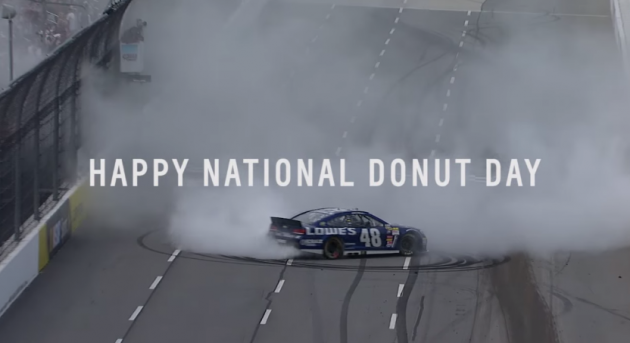 It’s the first Friday of June, and you know what that means: it’s National Doughnut Day!

Homer Simpson’s favorite holiday (or, at the very least, a close second to Whacking Day) was created by The Salvation Army in 1938, to honor the volunteers who brought doughnuts to soldiers fighting in World War I.

Since then, it’s evolved into a holiday that’s not unlike Halloween, Thanksgiving, or Christmas: a day when we, as Americans, collectively justify our horrible eating habits.

For Chevrolet, though, National Doughnut Day is a time to honor Chevy NASCAR racers who commemorated their wins by doing donuts in Victory Lane:

Jimmie Johnson’s No. 48 Chevrolet shows up quite a bit in this compilation, which is not too surprising, considering Johnson has six Sprint Cup Series Championships under his belt. There are also some quality burnouts offered up by fellow Chevy drivers Jamie McMurray, Kevin Harvick, and Dale Earnhardt Jr.

If you live close enough to an empty parking lot, why not go celebrate National Doughnut Day in style?

Or, you could just celebrate by getting a free doughnut at Dunkin’ Donuts (with the purchase of a drink), at Tim Hortons (if you show them this coupon), or Krispy Kreme (no purchase necessary!)

Or, on the other hand…