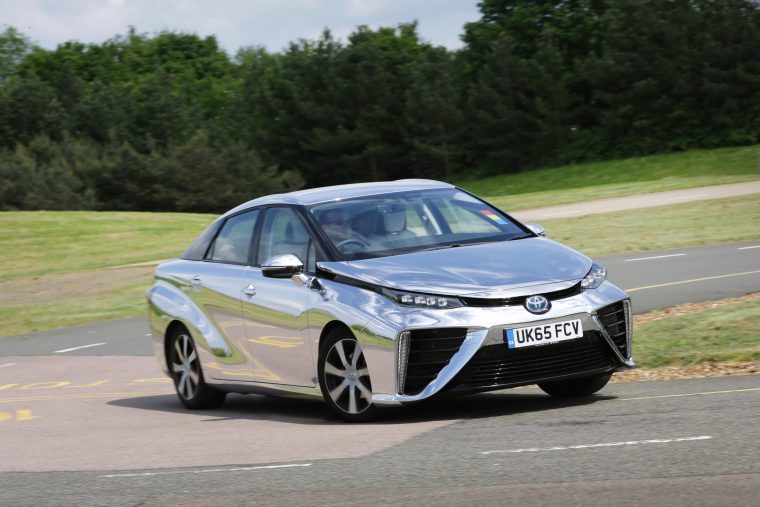 Why chrome? Yeah, we don’t know either.

Hybrid cars are enjoying increasingly high presence in racing. In fact, it could be said that hybrid powertrains are already the dominant species in the motorsport habitat—just check out the ultra-complex 1.6-liter turbocharged hybrid engines that make upward of 800 horsepower in Formula 1, or the spaceship-like LMP1 hybrid cars in the World Endurance Championship, which are soon about to face off at Le Mans.

Fully-electric cars are on the rise in motorsports too. The Formula E championship that debuted in 2014 is already making significant performance improvements, though it is still faster for drivers to switch cars during pit stops than to recharge the batteries. Nonetheless, there’s plenty of room for the technology to grow, and now Toyota is getting its motorsport feet wet as well with the new Mirai hydrogen fuel cell car.

The automaker brought a special, one-off Mirai dressed in full mirror-chrome to the Gurston Down Speed Hill Climb in the United Kingdom, marking its motorsport debut as well as that of all hydrogen fuel cell vehicles.

Emitting no more than water vapor, the Mirai launched around the 0.6-mile course at an average speed of 62.5 mph (100.6 kph), recording a best time of 44.44 seconds. That’s actually a very respectable time for a production sedan whose main shtick is efficiency and environmental friendliness. You can view the highlights below.

The Mirai’s main appeal is that it doesn’t suffer from the low range and long recharging issues that electric cars powered by lithium-ion batteries tend to experience, thanks to a 300-mile range and refueling time of just five minutes. However, it does suffer from very limited infrastructural support. If you don’t live in California or Japan, you’re unlikely to find a hydrogen refueling station anywhere—so if you were thinking about racing one of these babies, you might want to hold on to your wallet for a little while longer.

Two weeks ago, the Toyota Mirai was also driven around the Monte Carlo circuit by Prince Albert II to officially open the 2016 Monaco Grand Prix in hopes of strengthening environmental awareness. We doubt he averaged 62.5 mph there though.