Why is this Cop Dressed as Donald Duck? The Worst Sting Operation Ever 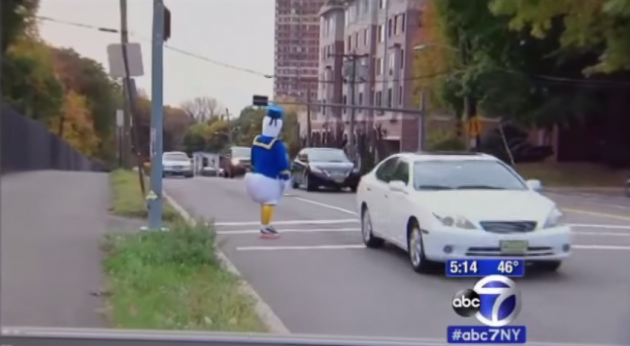 It takes an incredible amount of composure to keep your wits about you when you’re driving along and Donald Duck just starts walking across the road. Given how loudly your inner child is screaming (or that part of your brain that’s wondering if you remembered to take your anti-hallucinogenic medication that morning), it’s entirely likely that you’d forget you were even driving a car at all, never mind that you’re obligated to stop for pedestrians at crosswalks.

At least, that could be the potential argument of Karen Haigh, a New Jersey driver who was given a $230 ticket on Halloween for failing to yield to Donald Duck at a crosswalk. The reason she was given a ticket, you see, is because Donald Duck was actually an undercover cop working an elaborate sting designed to capture speeders not obeying the laws.

The Departed, this is not.

Given Haigh’s description of the events, it’s hard to blame her for falling for what might actually be the dumbest ruse ever concocted. 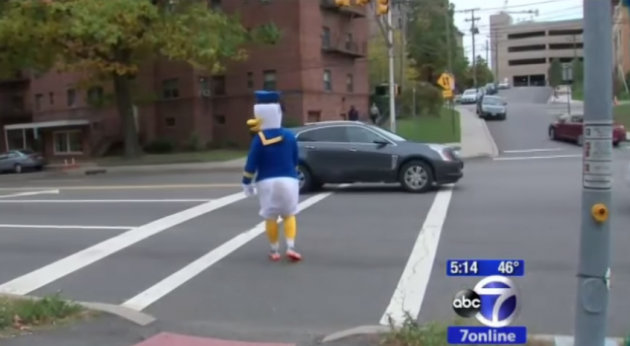 To her credit, Ms. Haigh has seen all of the Halloween films (yes, even that awful one with Busta Rhymes and the two abysmal Rob Zombie remakes) and knows full well that you don’t stop the car because you think the killer has gone back up on the curb.

According to Fort Lee Police Chief Keith Bendul, there were 62 incidences of pedestrians being struck by cars that didn’t yield at crosswalks. He says that the number is now down to 40, which is…still really bad. If this is that guy’s idea of stopping this problem, then maybe he shouldn’t win his next election. (Read: this is America, so he will win his next election.)

Whether Haigh’s claims that she was afraid of the Donald Duck cop are valid or not (and, let’s face it, they’re pretty reasonable), she brings up a valid point.

By all those people, she means the other 130 who were ticketed for the same offense.

Here’s what we can take away here: either one out of every five divers in Fort Lee, New Jersey is a reckless murder machine that’s liable to kill you at any second, or people legitimately don’t know what to do when a dude in a Donald Duck costume stutter-steps in and out of the road at random intervals.