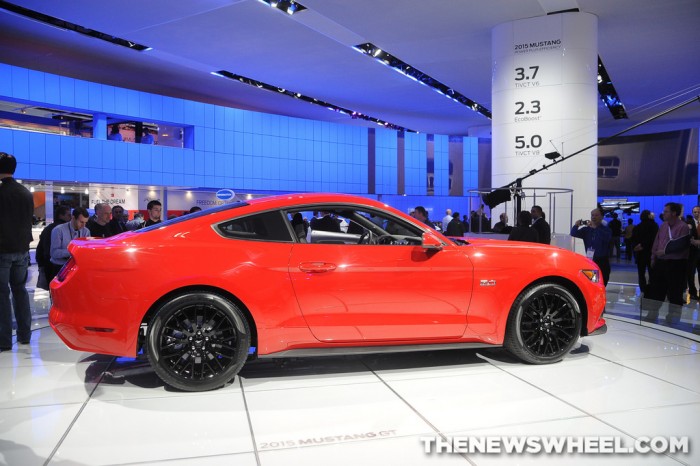 Since December 5, you’ve no doubt been sitting with your face pressed firmly against the screen of your laptop and muttering “when do I get my Mustang?” over and over again. Obviously. The 2015 Mustang will not arrive until later this fall, but you are at least now just a little bit closer to being able to remove yourself from your dangerous obsession thanks to dealer order banks for the 2015 Mustang now opening.

You can now officially determine just how much scratch you need to set aside for the entry-level model: $24,425 including destination and delivery for a fastback equipped with a 3.7-liter V6. This is a $1,090 increase over the 2014 Mustang’s entry-level price.

The 2015 Mustang will be available with three powertrains, a bevy of standard and available options, and in a variety of trims. The buyer’s choice of the 3.7-liter V6, 5.0-liter V8, or 2.3-liter EcoBoost four-cylinder engine can be mated to either a six-speed manual or six-speed automatic with paddle shifters.

The Dealer Order Banks Are Now Open for the 2015 Mustang

It was also announced that both the Mustang EcoBoost and the Mustang GT will be available with a 50 Years Appearance package that includes chrome-accented grille, 50 Years rear badge, 19×8.5-inch alloy wheels with 255/40R19 all-season tires, anniversary floor mats and unique seat and door-trim stitching.

While the 2015 Ford Mustang GT and EcoBoost are the only as-yet confirmed trims, it’s quite likely that the GT350 will arrive some time in 2015. With any luck, projections from AutoBlogwill prove true and we will also end up with an all-new Mustang SVO as well.

In any case, the dealer order banks are open, so you are now that much closer to your own 2015 Mustang. Please, in the mean time, try to pull your face away from the screen.