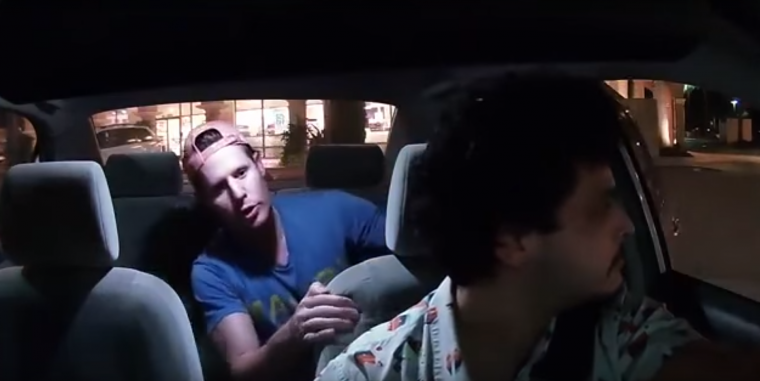 In a bizarre turn of events, a guy who was caught on camera attacking his Uber driver is now suing the driver… for catching it on camera.

Then-Taco Bell marketing executive Benjamin Golden was living más on the night of October 30th, indulging in the kind of alcoholic revelry that accounts for 78% of all Taco Bell purchases. And initially, he chose to do the right thing, by deciding to take an Uber rather than drive under the influence.

The whole incident was captured on camera and posted to YouTube. The confrontation begins at around the 2:25 mark, and turns violent at about the 3:15 mark. Take a look [WARNING: Video contains NSFW language]:

Golden, 32, was jailed on four misdemeanor charges and fired by Taco Bell after the video went viral. Afterwards, he gave a teary-eyed apology to CBS News and said that he was remorseful for his actions. However, it appears that now, upon further reflection, Golden has decided that he was the real victim in this whole mess.

You see, the incident took place in Newport Beach, California, where state law forbids recording someone without their consent, which Golden says he never gave. Golden claims that as a result of the video, he has “suffered severe emotional distress, humiliation, anxiety, fear, pain and suffering, and the loss of his job,” all of which apparently amounts to a cool $5 million in damages.

However, Caban’s lawyer is countering that the driver did tell Golden he was recording their ride (which isn’t shown in the video, but would be hard for Golden to dispute, since he admitted in his CBS interview that he has no memory of the event). Also, the Uber driver’s attorney believes that California’s law only applies to audio recordings, not video ones.

Suing a guy that you attacked is certainly a creative strategy (Golden and his lawyers seem to be “thinking outside the bun,” if you will). But its chances of succeeding are probably as good as the chances that an Uber driver has a spare $5 mil to pay in settlements.