In case you are waking up from an extended coma and are not immediately able to ascertain the nightmare that was 2016, it may behoove you to know right up front that America decided it was in its best interests to elect a contemptible moron president. So, hey, Happy New Year.

During the 2016 presidential campaign, aforesaid contemptible moron expressed the erroneous belief that Ford, by virtue of following through on a plan more than a year in the making and moving small-car production to a new plant in Mexico, was threatening to fire all of its employees in the United States. Since this contemptible moron’s base is other contemptible morons, a great many of his constituents glommed onto this idea without question and did their best to ignore the great many signs pointing to the conclusion that their candidate was lying to them. As such, the next President of the United States is a man who is not beholden to the truth, which gives him free license to say whatever comes into his tiny, racist brain and not be held accountable for it.

Unabated, the contemptible moron who will in a matter of days become the President of the United States will no doubt continue to swindle the American public for the duration of his contemptible and moronic presidency. On Tuesday, he continued his bid to influence the actions of the automotive industry through misrepresentation of the truth, offering the following tweet:

“General Motors is sending Mexican made model of Chevy Cruze to U.S. car dealers-tax free across border. Make in U.S.A. or pay big border tax!” reads the tweet from the barely-coherent president-elect. What he failed to elucidate—presumably because he seems incapable of expressing himself with anything above a fourth-grader’s level of articulation—is that the version of the Cruze built in Mexico and sold in the United States is the new, low-volume Cruze Hatchback. But, hey, since when did facts mean anything?

Automotive News adds that GM announced a $350 million investment plan in March that would see the next-gen Cruze built at its plant in Coahuila, all the while confirming that it would continue manufacturing the Cruze sedan in Ohio for domestic sales.

One commenter on Auto News’ article replied with the following: 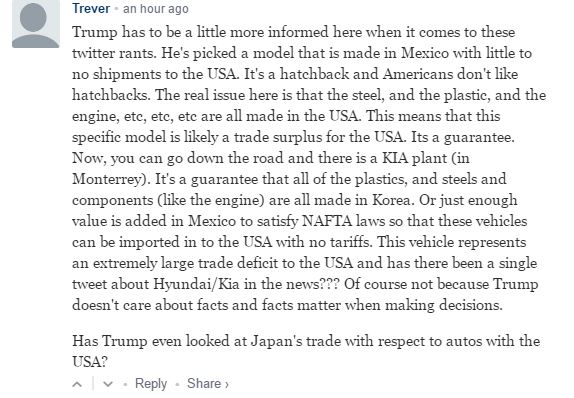 In any case, the contemptible moron who will in 17 days render any prestige that comes with holding the office of President of the United States moot is liable to continue tweeting half-truths and outright lies with the eloquence of a kid getting a C- in English, and people will continue to gobble it up like the words of an illiterate prophet. Nobody would blame you if you decided that coma sounded much more welcoming than being awake and aware in the United States for the next little while.

Update: Car and Driver points out that GM imported 8,400 Cruze sedans from Mexico in September-November to support the model’s launch. This much was reported by Youngstown’s WBKN 27 in June, but it did not make national headlines seemingly by virtue of not having been noticed the aforementioned contemptible moron. GM Corporate News Relations Director Pat Morrissey says, “We were very clear about that, very transparent about it.” It is noted that many of these imports remain unsold. Thanks for the tip, Nuh!