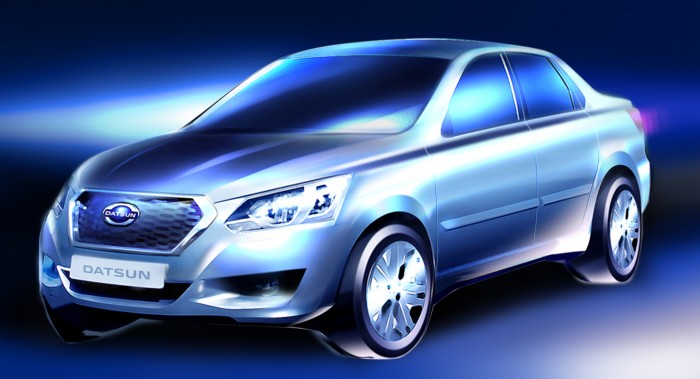 A sketch of the first Russian Datsun production model

Last year, Nissan announced the revival of the Datsun brand, and since then, the world has been impatiently waiting for Datsun’s first big moves. Customers in India are preparing for deliveries of the first Datsuns this week, and now Nissan has announced that the first Russian Datsun production model will be unveiled on April 4 in Moscow.

According to Nissan’s press release, Russia is seen as a key market for the Datsun brand, making the unveiling and eventual sale of the first Russian Datsun production model crucial to the Datsun global brand.

Datsun’s Russian webpage went live last week.; this website contains a countdown to the official debut for the production model. The automaker even released a sketch (pictured above) and animated video to tease us with ahead of the release. Check out the video below:

While the Russian Datsun was specifically engineered for Russian drivers, it stays true to the design philosophy of the Datsun brand, one that Nissan describes as “an engaging driving experience, peace of mind ownership and accessibility at the right and transparent price with a competitive Total Cost of Ownership.”

The first Russian Datsun production model was styled in Japan, but an international team of engineers developed the Datsun locally. Stay tuned for more updates on Datsun’s Russian model and the reborn brand in general here at The News Wheel.