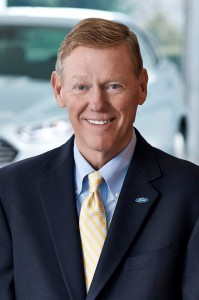 Alan Mulally is the CEO of The Ford Motor Company and due to his success in resurrecting the brand and keeping its head above water while other Detroit automakers were battling it out in bankruptcy court, he has become one of the most sought-after executives in the world; rumors have even been flying about Microsoft pursuing Mulally. So it makes sense that when Mulally traveled to the University of Georgia to speak with students, the room would be packed.

“Be terrific at the skill you’re doing right now, be open to the possibility of expanding those skills, and then just enhance and learn and develop your working together skills,” Mulally told the 425 students piled into the Tate Student Center’s Grand Hall at the University of Georgia.

“The most important thing is to simultaneously deal with reality, really the way it is, not the way you wished it could be or you hoped it could be,” he said. “But also have a vision about where you want to go.”

Mulally imparted his wisdom upon the ears of the hundreds of students in attendance; wisdom that the 68 year old had gained from a ridiculously successful career that has taken him from the CEO of Boeing to hold the same title at Ford, but he was unable to avoid the question of where he might go next – Microsoft?

“I love serving Ford, so I have nothing new to announce besides serving Ford,” said Mulally, which was probably followed by collective sigh of relief from everyone at Ford.