When you think of BMW, you most assuredly think of performance and possibly the kidney bean grille that all of its vehicles are adorned with.  The latter doesn’t look like it will change any time soon, but the German automaker is doing its best to add “efficiency” to that first thought. 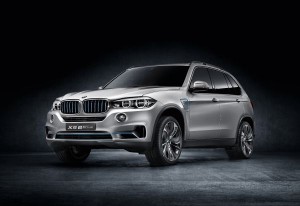 BMW’s “green” rejuvenation will be on full display during the 2013 Frankfurt International Motor Show, and the carmaker recently confirmed yet another addition lineup of vehicles making their public debut.  Joining the BMW i3 electric vehicle and all-new 4 Series in Frankfurt will be the BMW Concept X5 eDrive.

The eDrive moniker means that this X5 will be a plug-in hybrid.  The Concept X5 will feature a lithium-ion battery pack powering an electric motor paired with a turbocharged four-cylinder engine.  Together, the X5 eDrive’s powertrain will generate a little less than 200 horsepower.

When being driven in electric-only mode, the X5 eDrive will be able to travel up to 19 miles on a single charge and reach speeds upwards of 75 mph.  BMW hasn’t completely forgotten its roots, as the Concept X5 is able to travel from 0-60 mph in less than seven seconds.

If you’ll be in Frankfurt, Germany, stop by to see the unveiling.  If not, come back and visit us for all the most up-to-date information on the BMW Concept X5 eDrive.