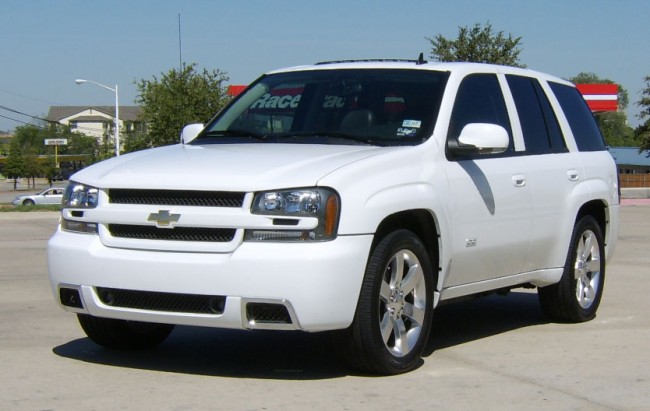 The Chevy Trailblazer is one of four vehicles named in the GM window switch recall. Photo: HumanZoom

Leaving your car on the street can be dangerous. If you don’t have access to a garage, you’re forced to park your vehicle at surface level, where thieves are more likely to break in and steal your private possessions or hotwire your automobile. To combat this problem, GM has introduced a new feature known as Spontaneously Combustible Power Window Switches, which fends off would-be carjackers by causing your vehicle to randomly catch fire.

At least, that is one way that General Motors could spin their latest in a series of recalls: the Associated Press reports that GM is recalling a group of SUVs for a third time, this time because the power window switches are at risk of catching fire. Because of this minor issue, GM is officially recommending that owners leave their SUVs parked outside, lest the automobiles catch fire while parked in a garage and the ensuing blaze consumes something that the customers have grown attached to, like a house, or the people who may occupy said house.

GM is just now offering this handy little safety tip to the public, despite the fact that the problem first appeared in 2012. For the past two years, the company has been content to address this slight setback through a “service campaign” that involved sending letters only to owners who resided in Washington D.C. and 20 states that apparently put a greater premium on human life than the other 30 do. The letters informed drivers that their SUV may have an issue with overheating parts, and extended their warranty while offering to service only the vehicles that exhibited the problems.

GM’s Hey-Let’s-Not-Get-Everybody-All-Worked-Up-Over-Nothin’ strategy has not been very popular with the National Highway Traffic Safety Administration, an organization which believes that what you don’t know can, in fact, hurt you. The NHTSA has already fined the company $35 million for not reporting ignition switch problems that have led to at least 13 deaths. As a result, GM promised to begin recalling cars more quickly, presumably adding “if y’all are gonna make a big deal out of it…” in a low, annoyed mumble.

So it’s nice of GM to make good on their pledge and finally give us the advice about not parking in garages. Plus, the GM = “Park-Outside-Or-Perish” (or, GM=POOP) safety system has a proven success rate:

In one complaint filed with NHTSA from October of 2008, a woman reported that the alarm sounded while her 2006 TrailBlazer was parked in her driveway. When she looked outside, it was in flames. Firefighters put out the blaze and told her it started in the driver’s door.

“The fire burned the entire driver’s side of the vehicle, a portion of the front passenger seat and the roof,” she wrote. People filing complaints are not identified by the agency.

See, by keeping her car in the driveway instead of the garage, this unidentified customer only had her SUV and not her home explode into a blazing fireball! Voila!

Of course, if you have pets or young children and, consequently, would not want your driveway to be on fire, the safest place to park your GM-manufactured vehicle might prove to be a below-ground swimming pool. Then keep it underwater until the fall, since GM says that parts to fix the problem won’t be available until October at the earliest (which is appropriate, since “GM Vehicle” is sure to become one of the most popular scary costumes this Halloween).

All in all, this recall affects a scant 189,000 vehicles in North America, mostly 2006 and 2007 models, including the Chevrolet Trailblazer, GMC Envoy, Buick Rainer, Isuzu Ascender, and Saab 97-X.

So if you own one of those SUVs, please play it safe and drive straight into the nearest body of water. Who knows, the next life you save could be your own!