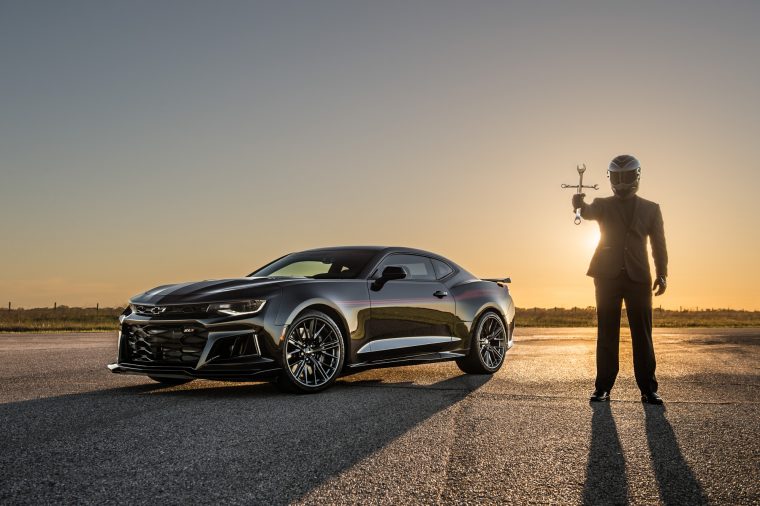 The power of Chevy compels you!

Earlier this morning, Dodge released the final teaser video for the Dodge Demon before its official reveal on April 11. The video, entitled “Judgement Day,” doesn’t really reveal anything new, but is rather a culmination of the videos that came before it.

You can view the final Dodge Demon teaser below:

Unfortunately for Dodge and its highly-publicized vehicle, the Dodge Demon could soon be facing a judgement day of its own. That potential reckoning comes in the form of a modified Chevrolet Camaro ZL1.

Hennessey Performance recently unveiled “The Exorcist,” a 1,000-horsepower Camaro ZL1. All signs point toward The Exorcist being Chevrolet’s answer to the Demon.

If the thematic naming wasn’t enough of a hint at a rivalry between Hennessey’s newest production model and the 2018 Dodge Challenger SRT Demon, then its performance stats might be the evidence that you need. In a thinly-veiled dig at the Demon’s emphasis on drag-racing, Hennessey founder John Hennessey stated, “The Exorcist is not just a ¼ mile racer. It’s a well-rounded super muscle car that is just as happy on a road course as it is on the dragstrip and street. Needless to say, this will leave the competition’s heads spinning.”

The Exorcist Camaro ZL1, introduced earlier this week at the Houston Auto Show,  will come equipped with Chevrolet’s LT4 V8 engine. Of course, the engine has been modified to produce up to 1,000 horsepower and 966 lb-ft of torque. 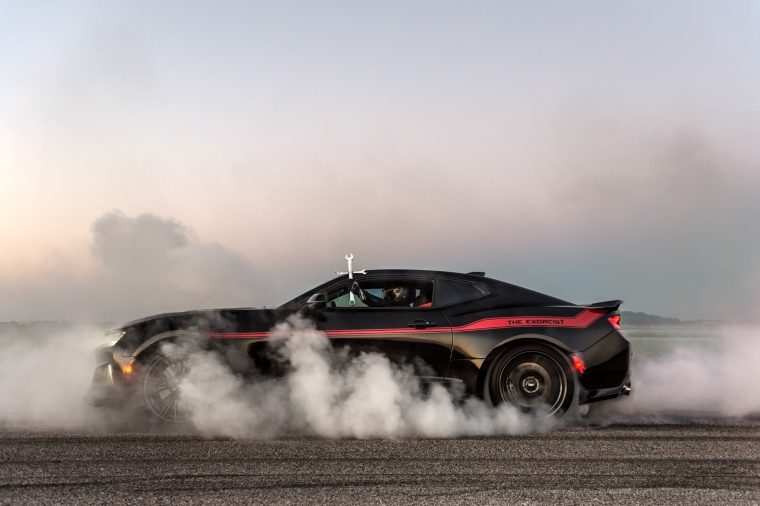 It probably runs on fire and brimstone

A higher-flowing supercharger and intercooler system work together to increase pressure. As such, the engine is able to create its publicized increased power output. 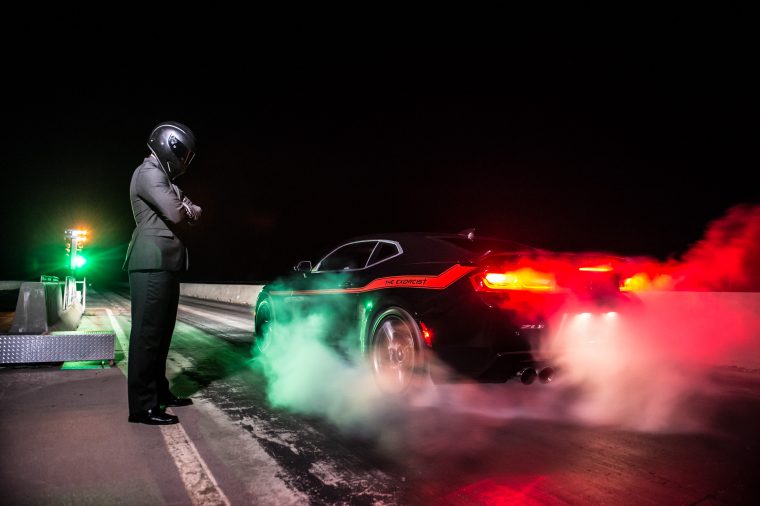 The Exorcist waiting for its Demonic rival on the dragstrip

As for a 0-60 time, The Exorcist is stated to accomplish this feat in under three seconds, while running a quarter mile in under 10 seconds. Easter eggs from the Dodge Demon teaser videos suggest that the Demon has a 0-60 time of three seconds flat.

You can watch The Exorcist in action in the video below:

So how much will transforming your Camaro ZL1 into a Demon-slayer cost you? For the graphics upgrades and the engine upgrades, the total cost is $55,000. This also includes a two-year/ 24,000-mile warranty.

Dodge Demon Origins: What Ever Happened to the Original Dodge Demon Concept?

While this is quite a bit of cash to fork over, it’s hard to compare the price of The Exorcist to the price of the Demon. This is mainly because we have no idea how much the 2018 Dodge Challenger SRT Demon will cost.

In fact, although the last three months have been littered with Dodge Demon teasers, we practically know nothing about the Demon at all.

It’s hard to say which model has more horsepower when we only know the horsepower of The Exorcist. Speculation for the Demon’s power output runs anywhere between 757 horsepower to somewhere above 1,000 horsepower.

While the creation of The Exorcist is obviously supposed to be reactionary, its reveal could not have been more different from the Demon’s unveiling. The Exorcist merely appeared like a bat out of Hell, revealing every aspect from its price to its power output. 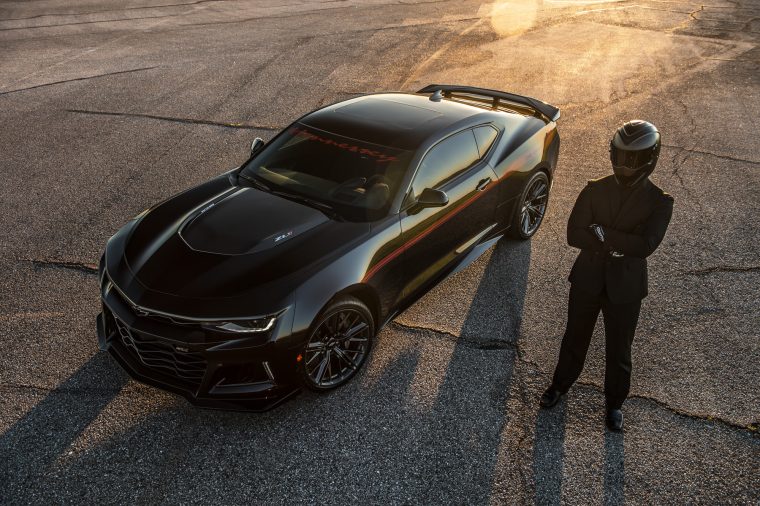 Nothing to hide here

Meanwhile, the Demon’s reveal videos have only showcased minor features, without giving away any performance statistics or pricing information. While Dodge might have wanted to build up hype for the model without revealing any of its cards before the model’s debut next week, its plan might have actually backfired.

When the Dodge Demon was first announced back in January, the automotive world was nearly universally ecstatic. However, after 14 different weekly teasers, many enthusiasts have grown tired of hearing about the Demon, with many more believing that no vehicle could live up to the hype that Dodge has been producing. 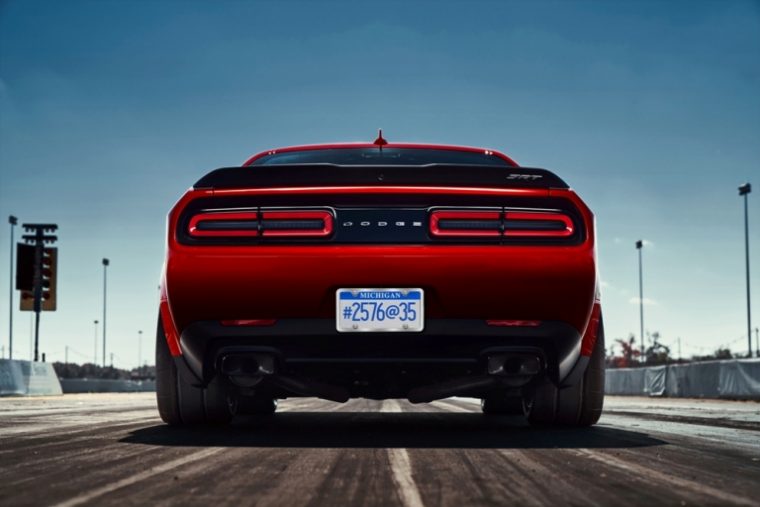 Has the Demon Hype Train been derailed?

Perhaps seeing cracks in the foundation beneath the Dodge Demon, Hennessey Production decided to quickly assemble a competitor to cast out the Demon. By being as transparent as possible during the reveal for The Exorcist, Hennessey might have appealed to those enthusiasts plagued by Demon fatigue.

Of course, Hennessey is not without is fair share of problems. Management struggles and troublesome vehicle deliveries have hurt the reputation of both the company and the man behind it.

Furthermore, The Exorcist seems to be available for a lot less drivers. While the Demon will be a full-production model, only 100 units of The Exorcist will be produced each year. 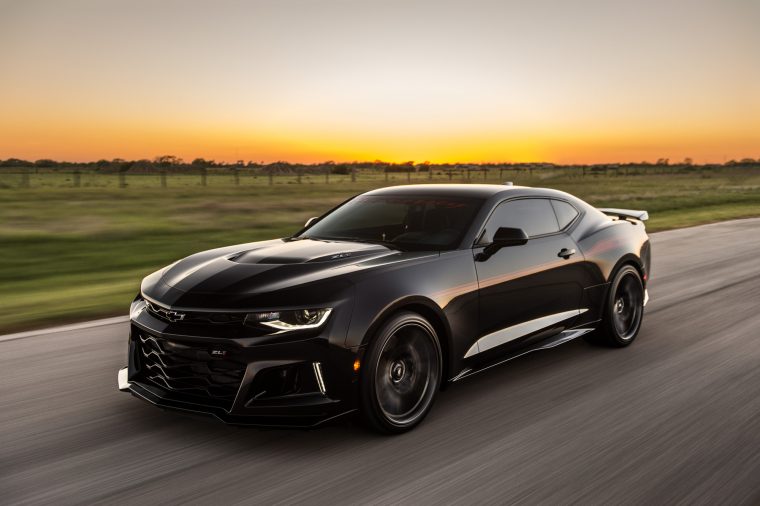 Evidently, Demon-slaying is a hobby limited to only a few

At this point, it’s difficult to take bets on who would win in a clash between the Demon and The Exorcist. Without knowing vital information about the 2018 Dodge Challenger SRT Demon, it’s impossible to really compare the two.

As such, the automotive world will just have to wait until the New York International Auto Show next week to declare a winner in this Hellish competition. Now we just need to wait for Ford to introduce its own competing challenger. 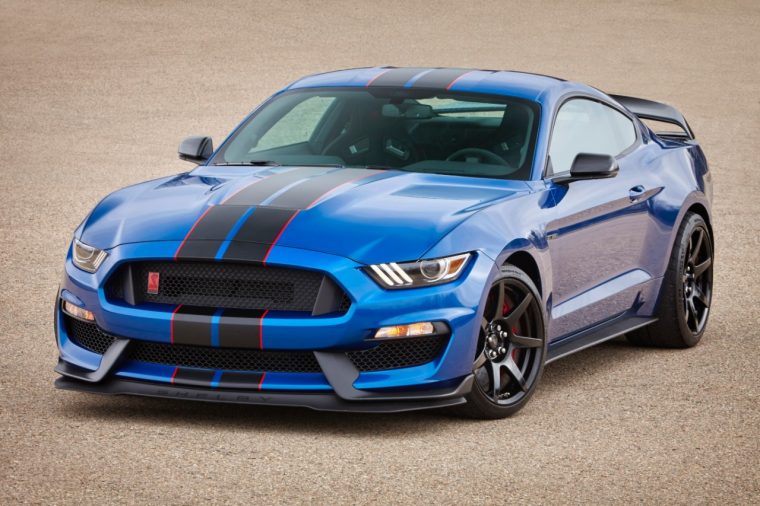