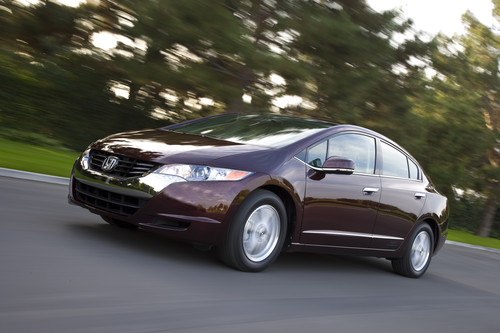 The Honda FCX Clarity is largely unchanged since its global launch.

When you first catch a glimpse of the Honda FCX Clarity, you might immediately think that it’s from the future, especially with its subtly curved roofline and streamlined body. Though it shares some body details that are slightly reminiscent of the Toyota Prius, the Clarity takes the hybrid’s aerodynamics one step further, achieving the ultimate efficiency from its fuel cell powertrain.

Instead of a regular or hybrid powertrain, the Honda FCX Clarity is an electric car powered by a 100-kW Honda Vertical Flow (V Flow) hydrogen fuel stack. This engine, which is based on the motor in the EV Plus, generates 134 horsepower and 189 lb-ft of torque. The electric motor is mated with a high-efficiency lithium-ion battery pack, which has a lighter, more compact package than before. The only downside is that it uses hydrogen to run, making it difficult to find filling stations outside of Southern California, which is why it is only available in that area.

If you’re tired of your gas-guzzler, the Clarity might be the right choice for you. With one of the highest mpg equivalent ratings, the fuel cell electric vehicle (FCEV) gets 61 MPGe, allowing it to travel up to 240 miles before refueling.

With its straight, clean lines and silver accents, it’s easy to see that Honda is attempting to make you feel as if you’re in the future when you first step into the Clarity’s cabin. While it’s not exactly successful, due to a fuel chunky-looking controls taking away from the aesthetic appeal, it does get the carmaker’s point across—this is the car of the future. To enhance the eco-friendly philosophy of the car, the seating material is made from plants, which is surprisingly comfortable. The technology in this car is abundant, with a navigation system with voice recognition and rearview camera and XM Radio helping you stay connected, even finding the next hydrogen fill station for you!