Is That a Log Tied Under That Car Instead of a Spare Tire?

Ah, Russia. You give us so much odd car news. First, there came the abundance of dashcam footage, showing us everything from truly terrifying crashes to the explosions of rocks falling from space. Then came stories like a grizzly bear riding around in a back seat like it’s no bid deal, dogs eating parked cars, and a team of hearse drivers being arrested for smuggling hundreds of thousands of dollars in illegal caviar hidden in the coffin.

And now, we have this image, taken in St. Petersburg: 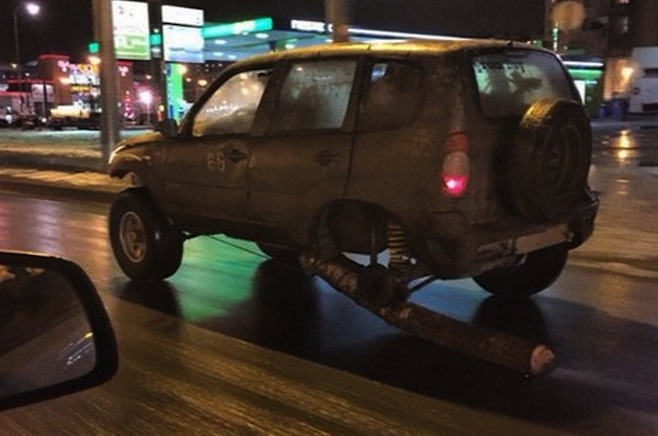 The log appears to be at least partially attached to the car using duct tape, and must have been causing considerable drag despite what appears to be icy road conditions.

The person who took the picture and posted it to VKontakte, a St.-Petersburg-based social network, wrote, “That guy was driving at 50 kilometers per hour, while everyone around pulled up, watching him.” For comparison, that is a little bit over 30 mph.

Several things are baffling about this image. Why a log? Why didn’t they use the spare tire attached to the back of the car (which, as most will recall, is the point of it)? Are those rally numbers on the car door? What kind of duct tape were they using that it not only is keeping the log attached to the car, but is supporting the car’s weight?

We may never know, but at least we know one thing, from St. Petersburg news site Fontanka.ru: more than 700 people have died and about 7,800 have been injured in car accidents in the Leningrad region.