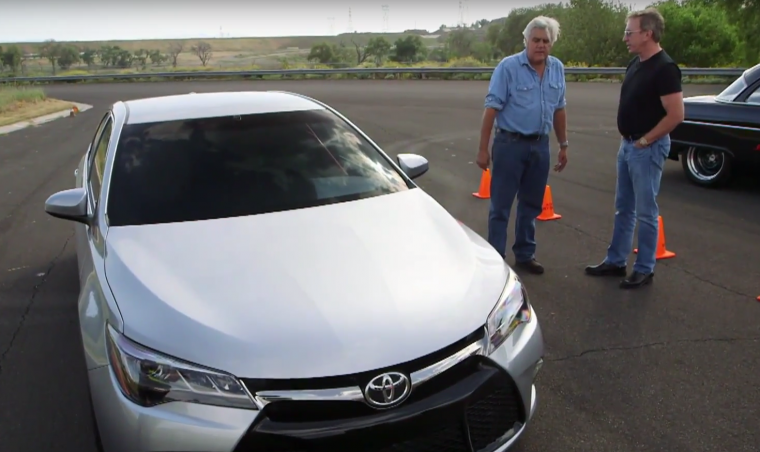 For a segment on his CNBC show Jay Leno’s Garage, host Jay Leno invited his fellow comedian/sworn nemesis Tim Allen back to the show for another race. This time, it was meant to be a matchup of two “totally stock” cars. But of course… boys will be boys.

Jay chose a 1966 Dodge Coronet still equipped with its original 426 Hemi, while Tim showed up with a 1955 Ford Club Coupe. Allen’s Ford certainly looks authentically vintage… until you open up the hood and see the 2005 Ford GT V8 inside.

You can probably guess where this is headed…

After Tim’s Ford is revealed to be less than stock, Jay says he thinks his Dodge has some “bad gas,” and decides to run home and grab his “wife’s Camry.”

Of course, the car he comes back with isn’t really Jay’s wife’s daily driver (unless she’s even crazier than her husband)—it’s a highly modified model with NASCAR tires, a roll cage, and a 5.7-liter supercharged V8 engine capable of 850 horsepower. That’s about 600 more ponies than a top-of-the-line production Camry has under the hood.

Tim Allen is more amused than surprised by the brazen cheating—he had to know Jay wasn’t about to bring a stock car to a sleeper fight.

But after he’s been badly beaten by the Camry, of course, Tim accuses Jay of being a liar, and the two get into an intense shoving match. After some “technical difficulties,” they call a temporary truce, and Allen has an idea for what vehicles they should compete in next: Army tanks.