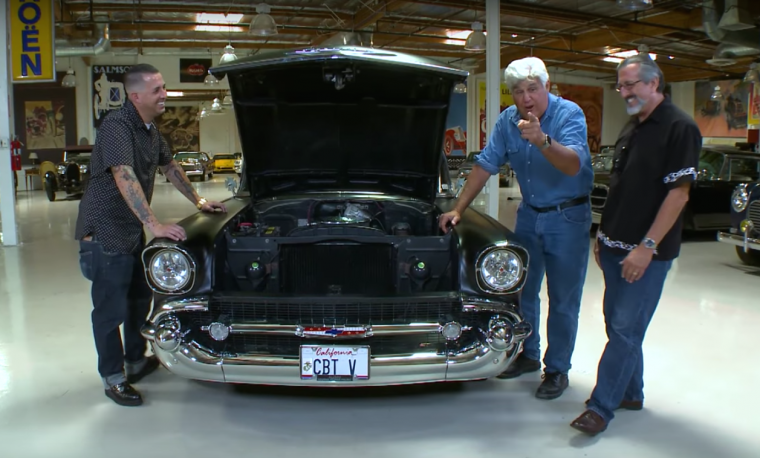 There are two things we’ve come to expect from the show Jay Leno’s Garage: famous cars and famous people.

Whether he is racing a Jet Dragster or checking out the car collections of fellow comics like Jeff Dunham or Joe Rogan, host Jay Leno tends to feature vehicles or people that are unique or recognizable.

In the latest episode, though, there doesn’t seem to be anything particularly remarkable about the featured 1957 Chevy 210 featured, or the father and son team that restored it—at least, not at first glance. But once you hear the story behind the car, you’ll no doubt see why it caught Jay’s attention.

The ’57 Chevy is a labor of love built by Vietnam veteran Richard Raher and his son, Aaron, who served two tours of duty in the Iraq War. When Aaron’s father-in-law gave him the bare bones parts of a 1957 Chevrolet 210, he and his dad decided to rebuild the vehicle as a bonding experience.

Richard found an original 283 engine and, over the course of two and a half years, he and his son restored the car to its original glory. They also added some personal touches, including references to Aaron’s medal of valor for combat action (though despite the vanity plates indicating his war hero status, Aaron has still gotten ticketed for speeding on base—for a measly 5 mph over!)

At the end of the video, Jay takes the car for a spin with Richard and Aaron. Of course, Leno takes the opportunity to thank them both for their service… and, of course, throw some shade at Toyota Corollas…

Driving 101: What to do if your car gets towed