Kia NAIAS Display: The One with the Creepy Old Man and the Hamster 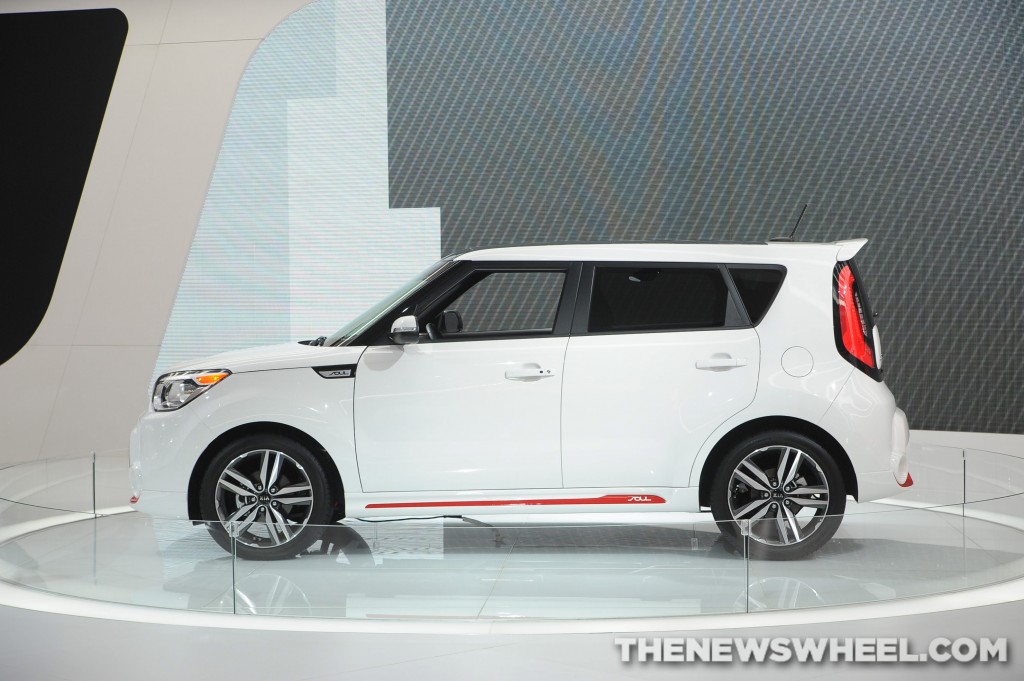 The first part of Kia’s display visible to us was the luxury section. Kia is attempting to enter the luxury market within the next few years, and much to cynical Tim’s surprise, the luxury rebranding is actually going quite nicely. The Cadenza and the newly unveiled K900 both looked stately and sophisticated, the kind of models you’d perhaps expect to see in the Lincoln showroom. It didn’t hurt that the atmosphere of this section of the Kia display screamed (or politely whispered, I suppose) elegance and refinement.

Cadenza on the Show Room Floor

The classy-looking wheel on the Cadenza

Me behind the wheel of the Cadenza

Controls in the Cadenza are easily accessible.

The back seats of the Cadenza

The Cadenza offers a good amount of trunk space.

Someone popped the hood of the K900 so we could take a look inside.

I actually really liked how Kia’s display was set up. (You can tell by my live tweets.) The Cadenza and K900 were sectioned off in what was a clearly luxurious division, marked by fancy furniture and lighting. It honestly felt like I was in a corporate office’s waiting room to see a money-hungry CEO. Then just a few quick steps around the corner, and we were face-to-face with the GT4 Stinger, which sat atop a rotating platform, bathed in glorious white light. Just a stone’s throw from the Stinger display was the life of the Kia party, a pack of Kia Souls, including The Voice Soul and the DJ Booth Soul and, of course, the newly slimmed down hamster.

I was blown away by the all-new GT4 Stinger Concept.

The rear of the GT4 Stinger

Front wheel of the GT4 Stinger

Another shot of a wheel of the high-performing GT4 Stinger

We couldn’t get inside, so Marci tried to snap us a sneak peek of the interior.

As we were leaving the GT4 display, Marci complimented a photographer’s fedora, inside which a press pass was perched “like the old days,” he said. Then they began to discuss the cameras he was using to shoot in 3D. Knowing nothing about photography and itching to play an Optima Hybrid game (because I’m a 22-year-old child who just might still wear cartoon underwear from time-to-time), I snuck off from their professional conversation. I took some notes on the 5-Door Rio and even tried to climb inside, but wouldn’t you know it, Kia had locked me out of that one. (There goes your positive review, Kia.)

Instead, I meandered around the rest of the cars, spending a lot of time in the Soul section and wondering why Adam Levine was nowhere near The Voice Soul. I mean, would that have been too much to ask?

The Kia Soul “The Voice” Edition

The signature Voice chair made an appearance.

The DJ Booth Soul was a deep purple.

The DJs figuring out the system in the DJ Booth Soul

The DJ finally figured it out after tinkering with his new toy for a bit.

After about fifteen minutes of roaming, however, I approached the Stinger display to snatch my photographer back from the fedora-wearing, 3D-shooting, white-bearded man who by now had somehow cornered Marci into a one-sided conversation about the ethnicity of Santa Claus, the Holocaust, and the latest police abuse scandals he’d covered. I tried to pull Marci away, but the guy clearly had claimed his audience and wouldn’t let go. (He tried to sucker me in too.) After about six minutes of sheer rambling—at this point I wasn’t sure if he was speaking English or a Spanish-Klingon hybrid—he managed to somehow end his tirade, but not without one or two more added thoughts as he walked away, and also not without possibly insulting our intelligence, although we can’t be sure.

“I have absolutely no clue what any of what he said in the last twenty minutes meant,” Marci said. With that, we went and photographed more cars. And I finally got to play the Kia Optima Hybrid game, which entailed driving an Optima Hybrid efficiently while battling the elements, like tornado-force winds, which we are now battling as we drive home, incidentally. If you get a chance to go to NAIAS on a public day this year, I recommend trying it out (although there was a simulated motion driving game in Ford Country that I missed out on that was probably even cooler). 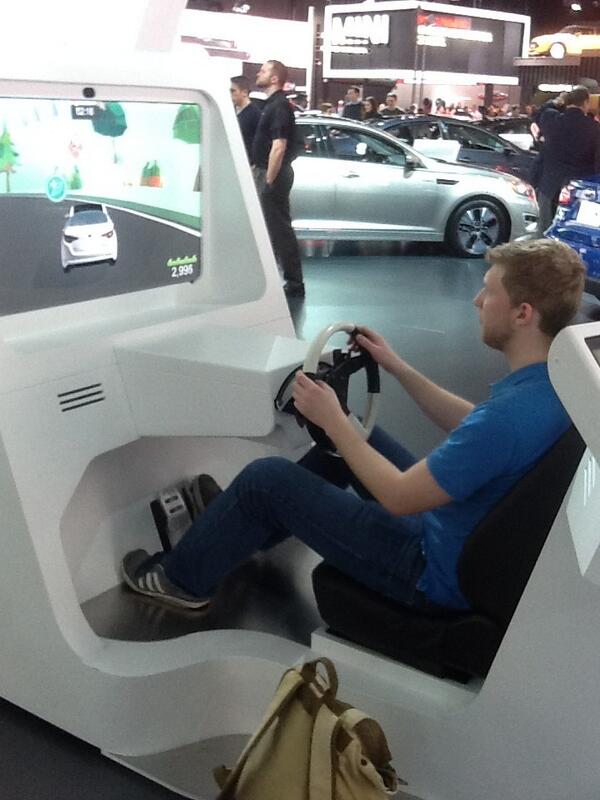 I finally got to play around with the Optima Hybrid game.

Beginning to grow hungry, we set our sights on the Volkswagen display.