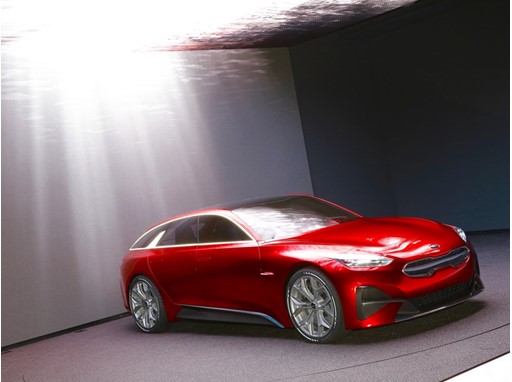 Making its debut last month at the 2017 Frankfurt International Motor Show, the Kia Proceed Concept was not only a new vehicle reveal for the automaker, but also a debut of a new body type for Kia.

According to Kia Global Motors Media, “The extended hot hatch sports a low roofline, muscular proportions and compact footprint. The concept features a striking ‘Sharkblade’ in the bodywork which reinforces the lack of B-pillars, while lateral strakes exaggerate the Proceed Concept’s waistline and lend an air of muscularity to the rear of the car. The concept is finished in bespoke ‘Lava Red’ paintwork, created by combining multiple hand-applied layers of black, chrome-effect silver, and red-tinted lacquer.”

The Proceed Concept’s interior features a dashboard with controls that are accented by knurled aluminum and four split-back seats that are crafted by hand and surrounded in rippled black material, and doors that are trimmed with hand-painted satin fabric.

Gregory Guillaume, Chief Designer Europe for Kia Motors, commented: “With many European drivers now seeking performance alternatives to the three-door hot hatch, we began thinking about a different halo model for the cee’d family. The Proceed Concept represents a bold new vision of how the vibrant soul of the pro_cee’d could be reincarnated and revitalised for a new generation of performance-oriented drivers.”

Although the Kia Proceed Concept is quite striking, it won’t be making an impression on U.S. markets, according to Car and Driver Writer Tony Markovich.

“The sporty nature of the Concept is no mistake, as Kia has said it wants to introduce more performance-oriented vehicles in the future. The Lava Red paint, which is a combination of black, chrome silver, and red, is complemented by numerous black (possibly carbon) accents,” Markovich reports. “The car sits on black 20-inch gearlike aluminum alloy wheels, and its pinched waistline is set off with black lower-body skirts. The white-letter l0w-profile Kumho performance tires are a nice touch as well.”

In addition to the Proceed Concept’s reveal at the auto show, Kia also showcased the Picanto X-Line, the new Stonic compact crossover, Kia Sorento GT-line design, and the Stinger.