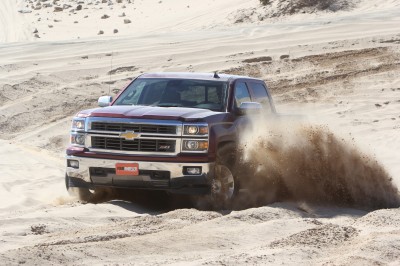 Four Wheeler Pickup of the Year

There are those who believe that occurrences in the universe tend to happen for specific reasons.  Tell that to Houston resident Allen Paul, who bought himself a 2014 Chevy Silverado as a Christmas gift (he must have been on the nice list this year…or perhaps he wasn’t, depending on how you interpret this next bit).  His story is certainly enough to make you believe in universal serendipity.  Kind of.

According to Jalopnik, Paul received a notice from GM pertaining to a recall issued earlier this month.  The recall, still in effect, is for 370,000 2014 Silverados and GMC Sierras and is intended to fix an issue with vehicle software that could cause exhaust components to overheat and start a fire (keep this in mind).

Undeterred, Paul left St. John’s School (where he is a wrestling coach), climbed into his 2014 Silverado, and began driving.  At some point roughly thirty minutes after he read the recall notice, all of the dash lights lit up, which made him stop.  That was when a sizeable “fireball from the hood” emerged, and by the time he had retrieved a fire extinguisher from a restaurant close by, the front of his truck was engulfed by flames.

KHOU 11 News broadcast footage that Paul shot of the Silverado on fire, which can be seen below.

Generally speaking, if one were to mention “Silverado on fire,” it would likely refer to the number of awards that the truck has won from various media outlets (including this year’s North American Truck of the Year award at last week’s NAIAS).  In this case, however, the Silverado on fire is a story that a fortunately-unharmed Paul will probably be able to laugh about in time.  At least, he’ll probably be able to laugh about it after Chevrolet hooks him up with a new (and hopefully fireproof) 2014 Silverado.