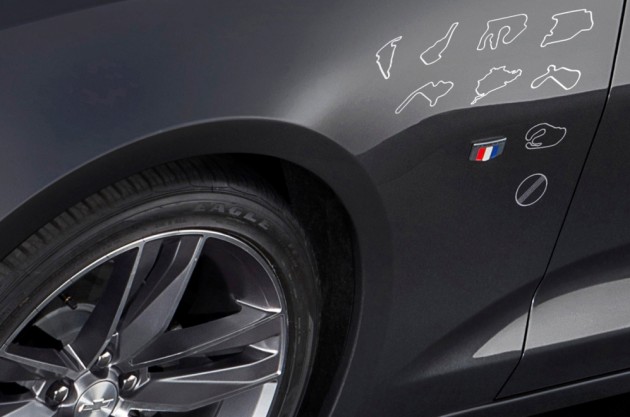 The 2016 Chevrolet Camaro has a lot to live up to. The legendary badge comes with a lot of expectations for a great muscle car with all the latest technology, while still remembering its legendary roots. With the latest generation’s reveal in May, the Chevy Camaro has been taking a tour of the United States to drum up support, popping up in places like the 2015 All-Star Game in Cincinnati Ohio.

In June, the Chevrolet Camaro made its surprise European debut at the Goodwood Festival of Speed to impress some of the world’s most picky auto enthusiasts.

To further prove how well this newest Camaro will fill the shoes of the older model, Chevrolet also sent it around the world to be track tested on eight of the world’s most famous tracks and the legendary Autobahn highway. You can see the courses painted in white on the Camaro above, as well as a badge from the Autobahn.

It’s one thing to just say that your car is fast and that it handles well, but it’s completely different to test a production car on a road track.

The Camaro is due to be released in the US this fall, but will not make its European debut until spring or summer of 2016. If you’re interested in the 2016 Chevrolet Camaro, take a look at the recently-released ordering guide for dealerships. Hopefully it won’t be too long before the sixth-generation Camaro is available to order!