When manufacturers unveil new show or concept cars, we fuss over them and their impressive designs. However, we know that these cars are so cool because they will never head into production. Nissan is proving us wrong this month, announcing that its Nissan GT-R50 by Italdesign show car from the Goodwood Festival of Speed is on sale.

Do It Right: Make sure you get your Christmas tree home in one piece

When Nissan first unveiled the car back in July, it referred to the Nissan GT-R50 as a prototype. This implied if the car did well on the show circuit, the automaker might actually build it. After its big party and world tour, Nissan has finally announced plans to make the car and sell it to fans. 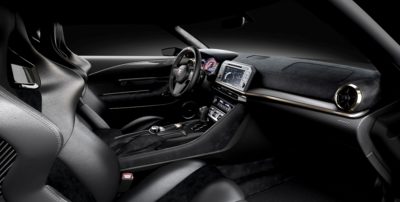 The bad news is that Nissan is only building 50 of them. And they’re really expensive. According to a recent press release, the Nissan GT-R50 by Italdesign’s order books are now open for the 50-vehicle production run. The starting price is €990,000, and that’s before taxes and any additional options.

On the outside, the Nissan GT-R50 by Italdesign is pretty much the same as the original version, except instead of a gray paint job with gold accents the car will now be the buyer’s color combination of choice. Buyers can also choose the interior color they prefer and feature upgrades.

A Bit Of History: Learn more about the legacy of the Nissan Z lineup

The original Nissan GT-R50 by Italdesign car was a partnership to celebrate the 50th anniversaries of both the Nissan GT-R NISMO and the Italdesign company.

“The reaction from Nissan fans around the world – and potential customers of the GT-R50 – has greatly exceeded our expectations,” said Bob Laishley, global sports car program director at Nissan. “These 50 cars, which celebrate 50 years of the GT-R as well as 50 years of Italdesign, will be rolling tributes to Nissan’s engineering leadership and rich sports car heritage for a long time to come.”

We hope that one of these custom vehicles makes it to the United States.