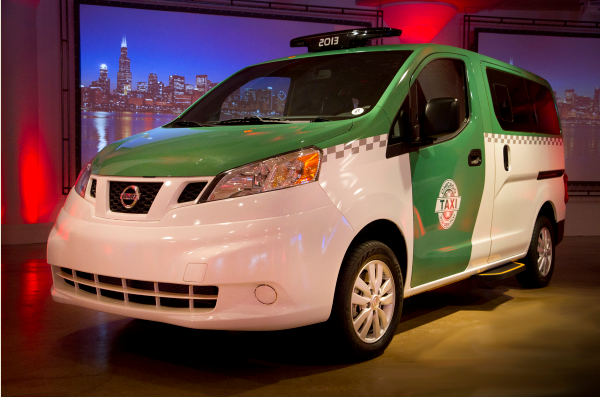 Nissan’s presence at the 2014 Chicago Auto Show is undeniably powerful: not only can visitors check out the full complement of Nissan’s 2014 lineup and the newly-unveiled Frontier Diesel Runner Concept Powered by Cummins and Versa Note SR, but there are a couple of super-fancy custom Nissan vehicles floating around the showroom floor. While we are certainly impartial to the Chicago flag-styled Rogue, the customized Chicago NV200 Taxi takes the cake.

If @CMPunk drove a Nissan Rogue, it would probably be this’n. Guessing he wouldn’t drive a Rogue, though. #FuelCAS pic.twitter.com/86SBcnIu6M

The customized Chicago NV200 Taxi is an effort on behalf of Nissan to encourage those living in the Windy City to take to social media and express their opinion on what makes for the supreme cab ride (using the hashtag #HailYes).

“With great feedback from drivers, riders and media in New York, we’ve had a number of dealers across the country raise their hands to get a supply of NV200 taxis for cities such as Seattle, Los Angeles, Salt Lake City and across Texas. We think Chicago is a natural fit for the premium taxi experience NV200 delivers at a competitive price,” said Fred Diaz, senior vice president, Nissan Sales & Marketing, Parts & Service, U.S.A., in his remarks last Thursday.

“Nissan’s #HailYes campaign will engage Chicagoans in conversation about what’s needed for a better taxi experience in the city,” said Diaz. “The solution for an improved taxi isn’t a pipe dream; it’s already here. We’d love to see those visiting or watching coverage of the Chicago Auto Show voice their support with a #HailYes shout-out in social media for the NV200 taxi.”

Take it from us here at The News Wheel: when you need to cram five people into a cab after being on your feet for an entire day and then standing out in sub-zero winds for several minutes, the amenities of the custom Chicago NV200 Taxi sound like heaven.