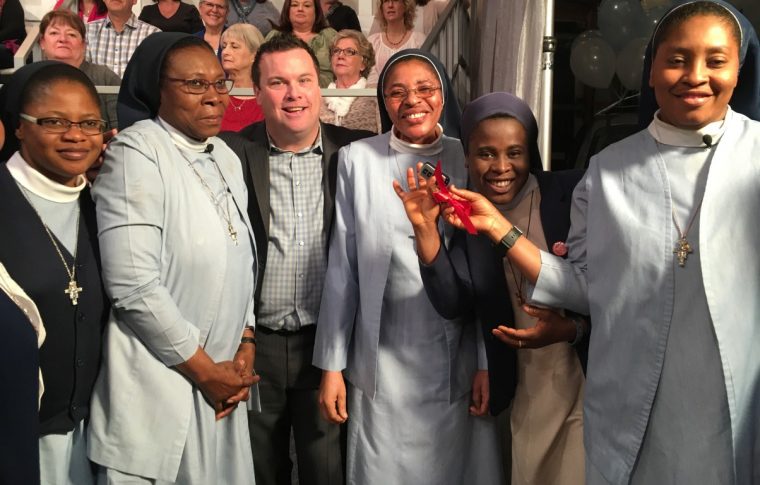 When you think of Whoopi Goldberg in relation to nuns, you probably think of the hit 1992 comedy classic Sister Act, which starred the actress posing as a nun as part of the witness protection program. In the movie, Goldberg’s singer character uses her talent to transform the convent’s choir into a vibrant, soulful group which proves to be popular with the neighborhood.

Since real life isn’t always like the movies, the latest news story to tie Whoopi Goldberg to nuns features Goldberg’s show The View, Toyota, and a Sienna minivan. In order to celebrate the 100th anniversary of an order of black nuns in Harlem, New York, The View and Toyota presented the sisters of the Order of the Franciscan Handmaids of the Most Pure Heart of Mary with a brand-new 2016 Toyota Sienna minivan to help them continue their work in the community.

In the Market? See what makes the Toyota Sienna one of the best minivans out there

To make this story even more impressive, Toyota also announced it would provide the nuns with a year’s worth of gas, as well as fill the minivan with toys and food to benefit their community. The Franciscan Handmaids run a daycare center and a food pantry, among other endeavors, as well as providing support and comfort to the sick and dying in Harlem and around the city of New York.

WATCH: @WhoopiGoldberg pulls off an epic ‘Sister Act’ surprise for a group of deserving nuns! https://t.co/wMrgSoiKFb

The Toyota Sienna is primarily marketed as a cool minivan, one which superstars like Busta Rhymes and Mark Wahlberg would be happy to be seen driving. But, at the end of the day, it’s a family vehicle with room for up to eight people, making it mostly favored by soccer moms and basketball dads. However, with all that room inside, it’s also the ideal vehicle for organization and outreach programs, such as those run by the Franciscan Handmaids.

While this donation doesn’t mean we will see a Sister Act 3 anytime soon, we can still dream. You can’t take that away from us.

Standard Safety: Toyota will make automated braking a standard feature on all cars by 2018