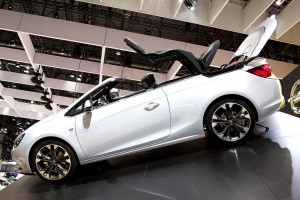 Buick might be getting a touch of European flair thanks to Opel, their German branch. Insiders say that the Opel Cascada, one of the brands most popular models, could be crossing the pond to America soon. The sporty convertible will add a bit of spunk to the Buick brand, but will have to be redesigned for the U.S. market.

Currently, the Cascada isn’t marketed in the U.S. because it was specifically designed with the European market in mind. In order to sell the convertible in America, it will need to be modified to fit America’s car industry regulations. Opel has already influenced Buick’s lineup with the German brand’s Insignia masquerading as the Buick Regal and the Opel Astra sedan modified for the U.S. as the Verano.

Dan Akerson, General Motors’ current CEO, is behind making Opel a more global brand. He plans on integrating the Opel and Buick brand more than ever before.

“What we’re trying to do is bring together the product development teams much more closely,” said Akerson. “There will be all sorts of synergies, I believe, between Opel-Vauxhall and Buick.”

Do you think Buick needs more of a European touch from Opel? Tell us what you think below!