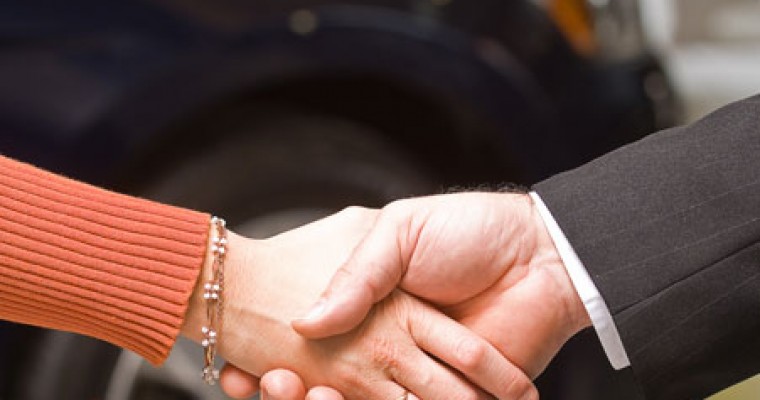 The Reputation Institute is back with its 2015 list of the most respected companies in the world. The New York-based private consulting firm has been evaluating influence and prominence around the globe for 18 years, publishing its respected Global RepTrak 100 list for the past 10 years. Two years ago, BMW earned the honor of being the world’s most […]

Chevy Launches its Own Lifestyle Magazine 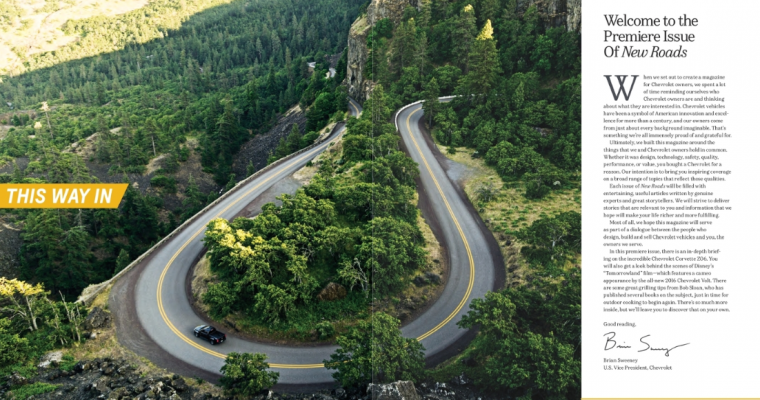 Chevy is really taking an interest in print media, lately. Not only has the bowtie brand started putting digital video ads in magazines (yes, you read that right), but now the company is launching a magazine of its own. It’s called New Roads, and the very first issue is already available to read online for […]

Dine in a Classic Convertible at the Sci-Fi Dine In 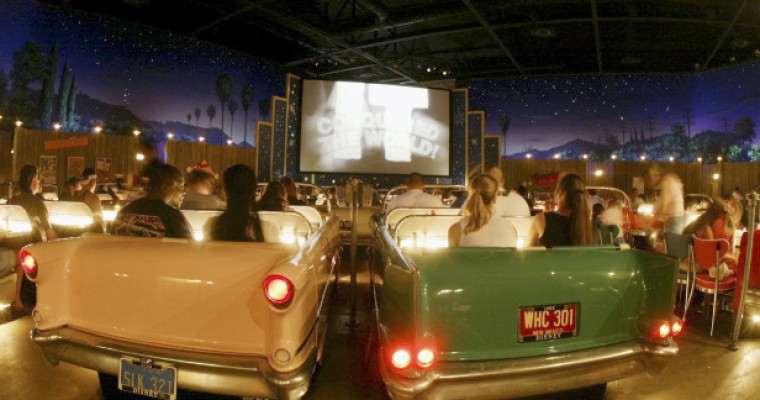 Grab dinner and a movie, all from your classic convertible.

Want to go back to the classic days of malt shakes and drive-in movies? Enjoy dinner under the stars as you take in movies and delicious entrees at the Sci-Fi Dine In restaurant at Disney’s Hollywood Studios park. Just off of Hollywood Blvd, the Sci-Fi Dine In is a can’t-miss. Outside, a classic convertible sits […] 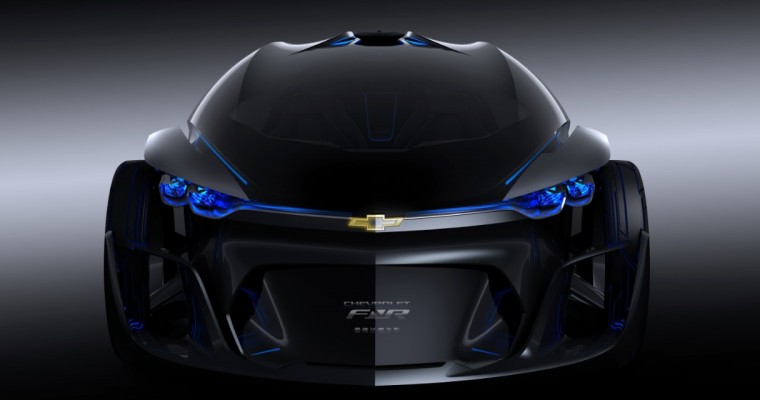 It’s hard to fathom why Chevrolet paid to feature a 2016 Volt in the upcoming sci-fi movie Tomorrowland if the automaker had one of these things lying around. Unlike the Kia Optima, this futuristic concept looks like something that might actually have been in the new Star Wars trailer. Dubbed the Chevrolet-FNR, this autonomous electric […]

CONFIRMED: New Star Wars Trailer Doesn’t Have Any Kias in It Well, the new Star Wars: The Force Awakens teaser trailer has just been released (and no, for better or worse, it’s not a RickRoll this time). In case you haven’t seen it yet, here ya go: Obviously, everyone here at the office is really jazzed about this two-minute teaser. Unfortunately, we write for an automotive […] Most people in America are still enjoying relatively low gas prices, but the good people of Dayton, Ohio, are being charged nearly $10 a gallon, thanks to some outrageous price gouging apparently committed by Zeus himself. The Dayton Daily News reports that a Speedway in Trotwood, Ohio, was struck by lightning last Thursday, causing the […]

On Second Thought, Maybe Chevy Won’t Call it a “Bolt” 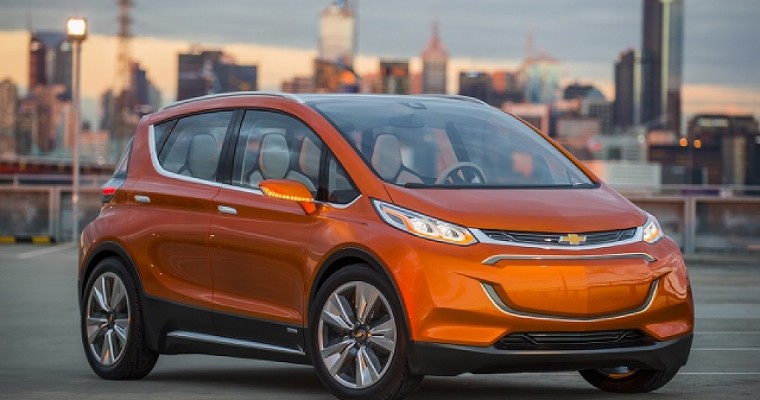 When the 2016 Chevy Bolt concept debuted in Detroit last month, it attracted a lot of attention, and even some speculation that the eventual production version could take on Tesla. It also prompted some less positive responses, chiefly the complaint that “Bolt” is a terrible name that sounds too similar to the Volt (and also […] 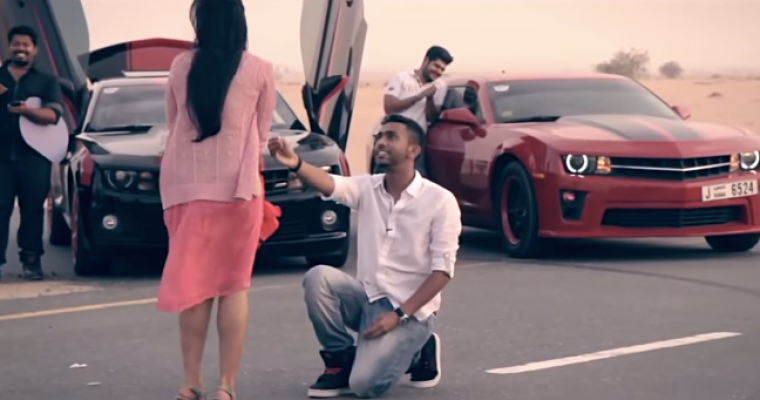 Here’s some car news that can be filed under ALG: Ain’t Love Grand? A Dubai man wowed his girlfriend with an elaborately romantic marriage proposal, made possible with help from his fellow members of the United Arab Emirates Camaro Club. Check out the video below. [WARNING: Those with low schmaltz tolerance should be aware that […] 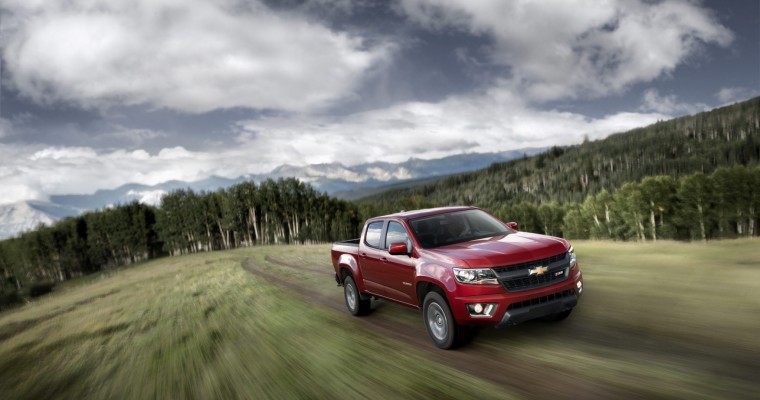 Although that headline may have made you assume that Tom Brady gifted a pickup truck to his most loyal manservant, “Butler” is actually the surname of newly-famous New England Patriot cornerback, Malcolm Butler. The undrafted rookie saved Super Bowl XLIX for the Patriots when he intercepted Seahawks QB Russell Wilson’s pass at the one-yard line, […] 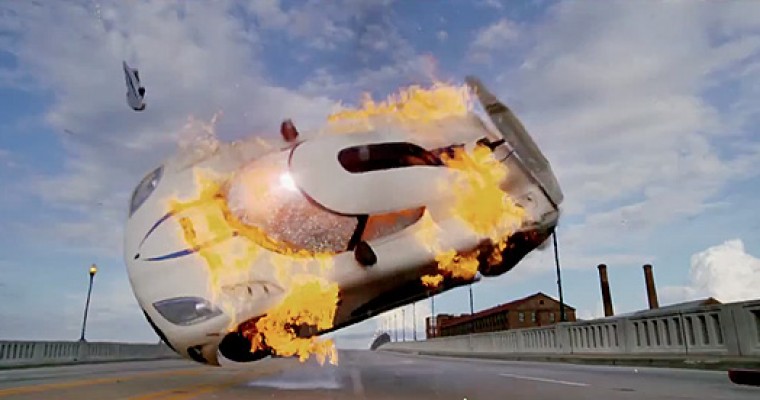 For all the CGI-filled blockbusters hitting the movie circuit every summer, nothing beats a good ol’ fashioned car crash. Action films these days might not be rivaling the sheer quantity of stunt crashes like those in The Blues Brothers, but their extreme executions are becoming increasingly impressive. If you’ve ever wondered how stunt crews launch […] 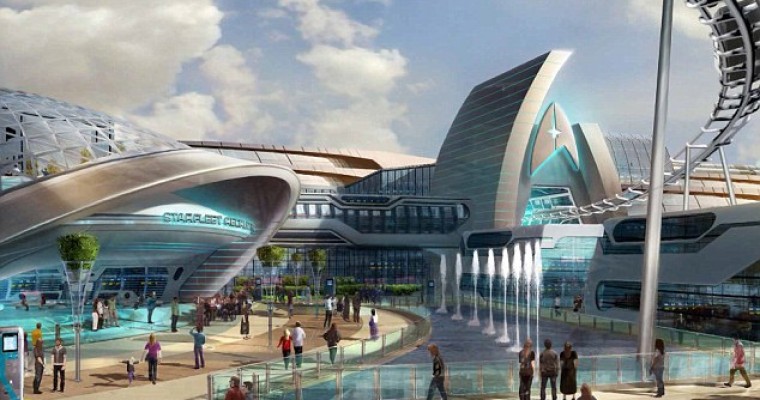 If you didn’t have a reason to visit the UK before now (and you’re crazy if you didn’t have at least ten), the soon-to-come BBC theme park should be enough to win you over. Reportedly, the park is due to open in Easter of 2020 in Kent, meaning we could see rides based on The […]

[VIDEO] Daredevil Shows Off His Motorcycle on a Roller Coaster 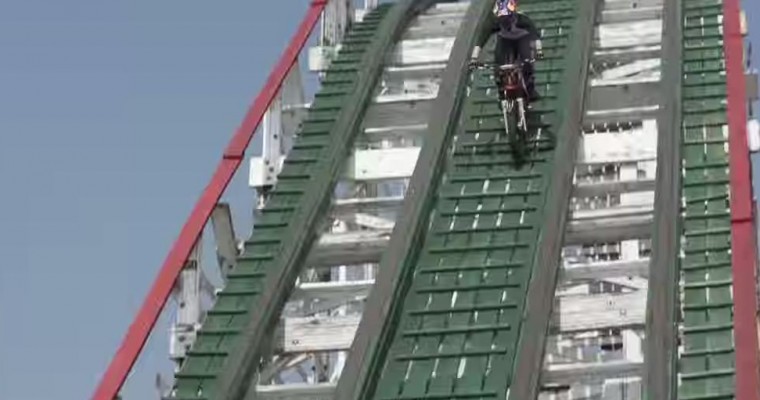 Motorcycles can be scary to those of us who are used to keeping things on four wheels. But they’re even scarier when you think of some of the crazy stunts the pros do on them, like Ricky Carmichael’s recent jump over the Colorado Performance Concept, or when you think of how easily you can get […] 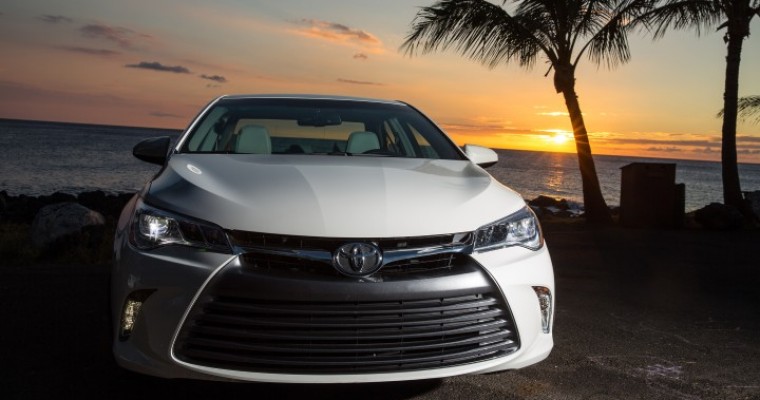 It’s not even Thanksgiving yet, but there’s already buzz surrounding the commercials awaiting us during Super Bowl XLIX. Unless you’ve grown up under a rock, you’re probably aware that Super Bowl commercials are kind of a big deal. Companies pay millions of dollars to feature during commercial breaks, even for a mere 30 seconds. As […]

Mercedes Named 10th Most Valuable Brand in the World 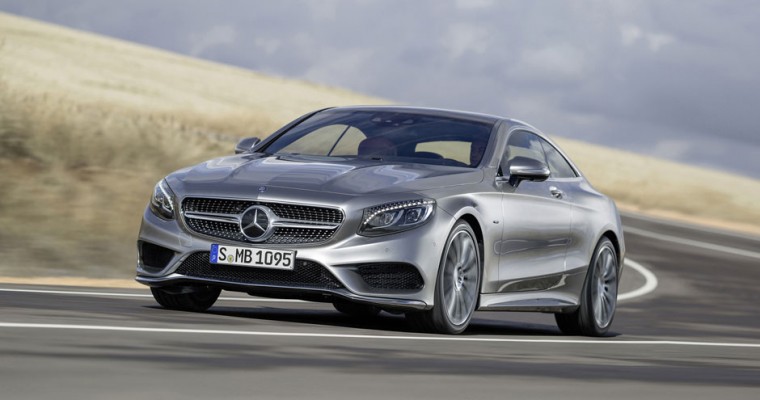 Mercedes-Benz was named the 10th most valuable brand in Interbrand’s 2014 Best Global Brands report. This would be enough to brag about given the fact that Mercedes-Benz is deemed more valuable than captains of industry like Disney, Amazon, Nike, and Facebook. However, it’s likely that the luxury automaker is plenty content with the mere fact […]

BMW Stormtrooper: This IS the Drive You’re Looking For! [Gallery] 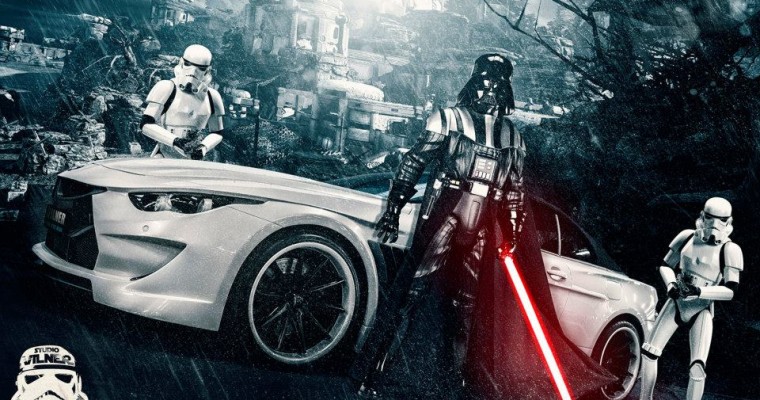 “Now, young Skywalker, you… will… drive!” Bulgarian tuning company Vilner has combined two things we love: hot cars and Star Wars! We want to tell you all about it, but we’ll try not to overwhelm you with too many one-liners in the process. Modifying its BMW 6-Series Bullshark E63 coupe revealed last year, Vilner has proudly […] 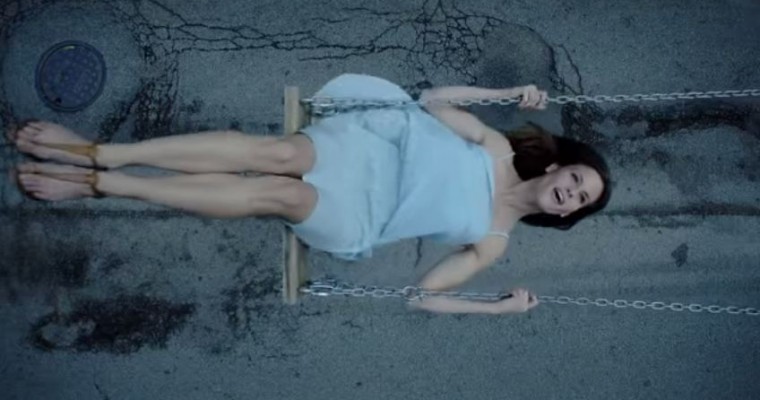 Who knew that the ABCs could be so haunting?

In the latest weird ad from Fiat (and trust me, there are a lot of them), an Italian woman sits atop a swing that dances across an abandoned city street while chanting the ABCs in the most chilling manner I’ve ever heard. The ad in question is a Fiat 500X teaser (which you can check […] 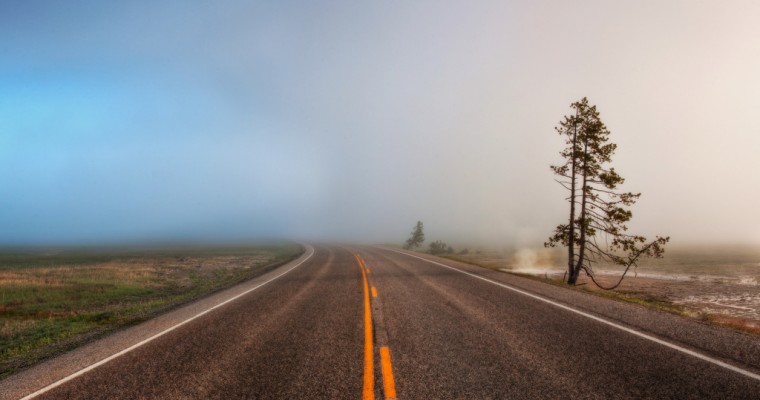 As today is the first day of autumn, it’s time for The News Wheel to close its summer series on road trip movies (aka road movies). After collectively studying almost thirty road trip films in depth, we offered our choices for the best, worst, and goofiest of them last week. Through the junk and the gems, we’ve practically traveled to every […]

How to Organize a Trunk or Treat 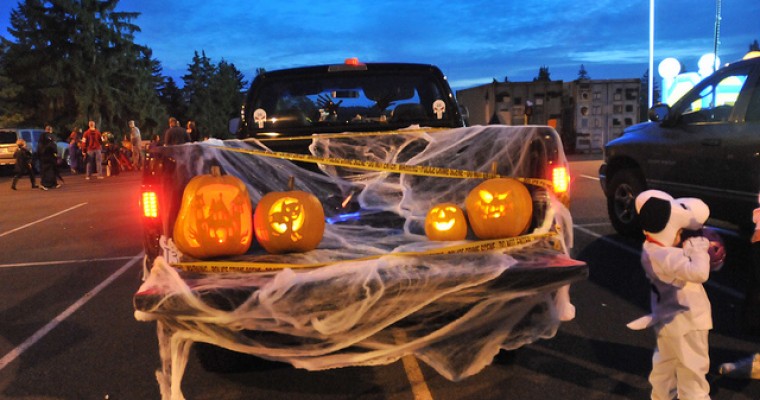 It’s hard to believe, but October—and then Halloween—are right around the corner. (You’ll be able to tell any day now when stores begin to put up Christmas trees…) The usual trick-or-treating is always a fun time with the little ones, but if you’re tired of hiking around several miles in the bitter cold just to […]