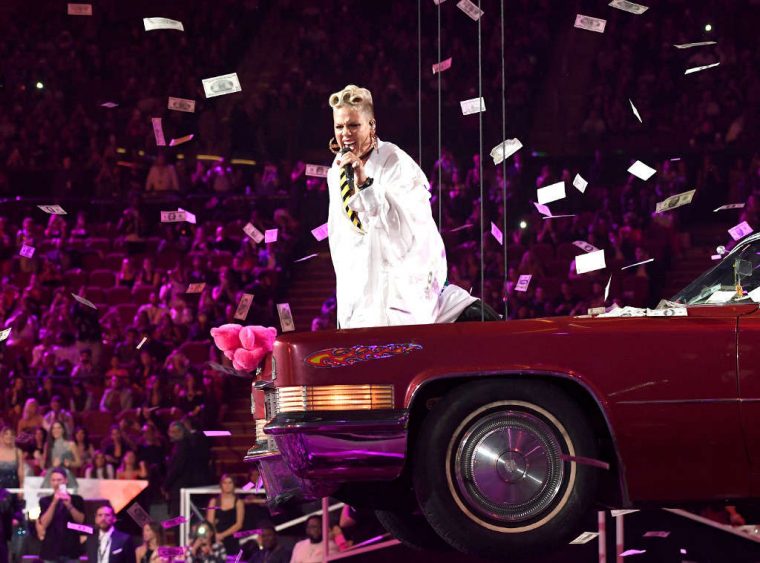 The 2017 MTV Video Music Awards were pretty memorable, from Fifth Harmony’s shocking performance featuring a “former fifth member” falling off the stage to Logic addressing mental health with his song “1-800-273-8255” (the Suicide Prevention hotline). The Video Vanguard recipient, Pink, made quite a statement with her moving speech to her daughter Willow and her radical performance that included a mashup of many of her top hits.

Donning an outfit that had “Wake the F*ck Up” and “F*ck Donald Trump” ribbons on the sides, Pink first appeared on the hood of a pink convertible Cadillac DeVille that was suspended above the crowd while she belted out “Get the Party Started.” Viewers were quick to state their worry about the floating car, via Twitter, and some of those comments were fairly funny.

People in the crowd bopping to Pink while looking out for the car #VMAs pic.twitter.com/XyoZh19kqS

@Pink is sailing through the air on that car like she’s in Grease #VMAs pic.twitter.com/42zucrHLfo

Before the singer hopped off the vehicle to continue her set, it was raining (fake) $100 bills onto the potentially anxious crowd. Although the Cadillac’s cameo was short, it was thrilling. Pink did drive another vehicle during her performance though—a green riding lawnmower. Iconic.

Watch the full performance from Pink below: