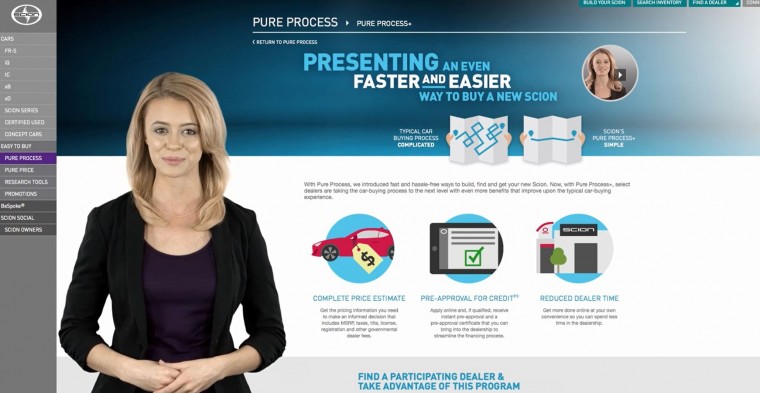 It’s no secret anymore that Toyota has officially killed the Scion brand. Starting with the 2017 model year, four of Scion’s models (the FR-S, the iA, the iM, and the new C-HR) will be transitioning under the Toyota umbrella. But there is another element of the Scion brand making the jump to Toyota: Scion’s Pure Process Plus online buying program will be reconfigured as Toyota’s Express Process.

What was supposed to draw younger car buyers, who studies show dislike the haggling process of buying a car, to Scion was the Pure Process Plus model of a car purchase. Through the online program—another Millennial preference—car buyers could browse new and used inventory directly on an OEM (original equipment manufacturer) site rather than a local dealer inventory page, as well get a trade-in offer, apply for credit, and even schedule an appointment to have the vehicle delivered (because who needs a test drive?) for pickup.

Scion’s Pure Process Plus program has been available for a select number of dealerships for the last couple years. The automaker intended to roll it out to all dealers this year before it was announced that the brand would be discontinued. Instead, it will be repackaged for Toyota vehicles as Express Process. So far, there is no indication that Scion’s no-haggle in-store Pure Price model will transition to Toyota.

The announcement was made to Toyota dealers during a meeting in Las Vegas. According to Automotive News, Toyota also reaffirmed its promise to help with the financial side of transitioning a dealership from a dual Toyota-Scion model to a pure Toyota establishment. Finally, Toyota also revealed more about the 50th anniversary Toyota Corolla, as well as the updates coming to the Toyota Camry and more information on the new Toyota C-HR.