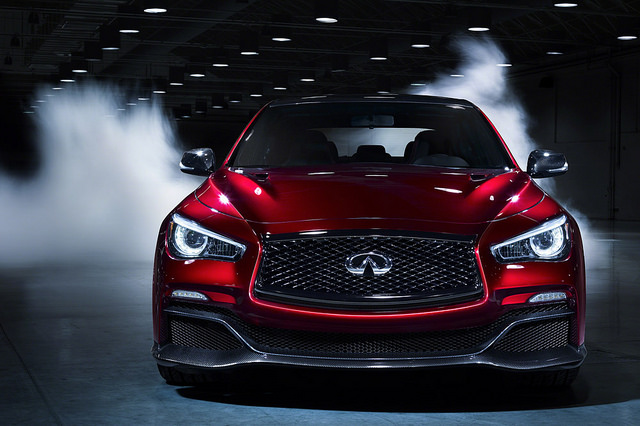 Infiniti wowed us all at NAIAS when they showed off the Q50 Eau Rouge, a sport-tuned take on the brand’s popular sedan. Last month at Geneva, they stepped it up a notch by lifting the hood to reveal its unfathomably sexy twin-turbo 3.8-liter V6 that generates 560-horsepower. This month at the 2014 Beijing Auto Show, the next stage in the evolution of the Eau Rouge will be revealed when Infiniti shows footage of the prototype being tested by none other than their Director of Performance, four-time Formula One champion, Sebastian Vettel.

According to Infiniti’s press release, Vettel tested the Q50 Eau Rouge prototype at the Millbrook Proving Ground. Since we’re talking about the youngest-ever, four-time F1 champion, it’s pretty well assumed that Infiniti’s prototype was put through its paces as it was tested for performance, handling, and precision.

Since Seb is to performance car what Tom Booker is to horses, engineers at Infiniti took the champ’s feedback into the next stages of the Q50 Eau Rouge’s development process. One of the ultimate determinations: viability. Given how beautiful yet powerful the Eau Rouge looks, we can only hope that Seb used some of that pull to give Infiniti’s top brass two thumbs up as it relates to bringing the beast to production.

For more information on the footage of Seb and the Q50 Eau Rouge prototype, check back with us at The News wheel on April 20 for the latest out of Beijing!