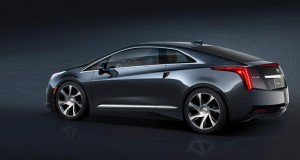 Cadillac ELR sales in December are causing the company to be very optimistic about the direction of the company.

Generally speaking, if you are a big-wig at a major auto manufacturer and your monthly sales total for a model is six units, you’re liable to sprint down the boardroom table and take a headlong dive out a 100th story window ala Waring Hudsucker. However, in the case of Cadillac, six ELR sales in December proves a promising sign for the future ahead and is absolutely unlikely to cause defenestration of any kind.

Cadillac’s extended-range electric vehicle began shipping from the Detorit-Hamtramck Assembly plant a week before Christmas and a month before its originally-scheduled release date. Inside EVs estimates that about 60 ELRs were available in December, indicating that the movement of six of the $75,995 electric luxury coupes is a sign of good things to come.

While it is difficult to determine how many Cadillac ELRs GM intends to produce or how many they expect to sell in the next year, the automaker picked an ideal time to throw their hat into the plug-in hybrid ring: GM Authority notes that plug-in sales were up 84 percent in 2013, signaling a growing interest in the relatively new technology.

The optimistic outlook for the newly-released Cadillac ELR is only enhanced by the luxury brand’s recent announcement that cumulative 2013 sales make them the fastest-growing full-line luxury brand in the world.  Cadillac’s sales were up 22 percent in 2013, and continued brand expansion in 2014—including the full integration of the ELR into the lineup—should result in furthered success for GM’s luxury arm.

With a combined driving range of 345 (pending EPA certification), the six ELR sales in December will likely give way to continued growth and interest as 2014 continues on. Stop back by The News Wheel at the beginning of February to see how Cadillac’s EREV performs in its first full month of sales!