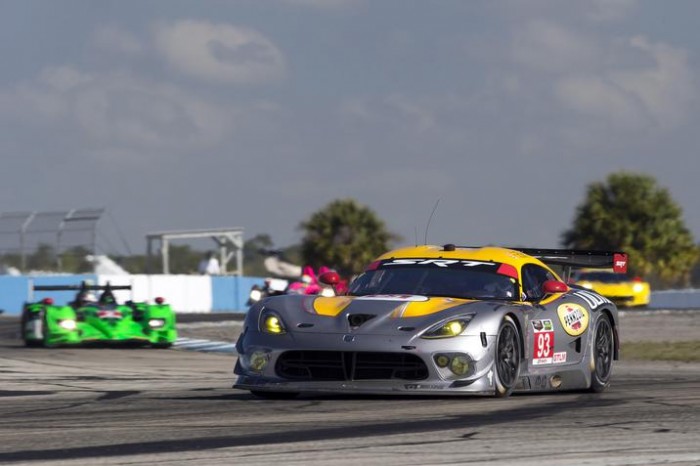 Ahead of the looming 12 Hours of Sebring, March 12-15, Chrysler’s Street and Racing Technology (SRT®) Motorsports is positioning itself as one of the favorites after posting the third-fastest lap in the GTLM class. The SRT Motorsports No. 93 SRT Viper GTS-R threw down the gauntlet with a 2:00.496 run at a speed of 111.738 miles per hour in its two day test at Sebring in February, putting the field on notice ahead of this month’s race.

“It was a very positive test just from a systems point of view. We had a lot of things to try—not necessarily making the car go as quick as we could,” Bomarito told Chrysler in a statement. “Toward the end of the day, we started putting all those pieces together and working on pace and race stuff, but we got through a lot of stuff. The guys did an awesome job. The car ran perfect for two days and I think we have a good race car. A couple of our competitors went pretty quick there at the end, but we’re still pretty optimistic and positive looking forward.”

The SRT Motorsports No. 93 SRT Viper GTS-R, which finished about a second behind the first and second place Porsche vehicles, can next be seen on the track during the 12 Hours of Sebring. For race results, check back in with us here at The News Wheel.