The Redesigned 2017 Porsche Panamera Will Leave You Flabbergasted 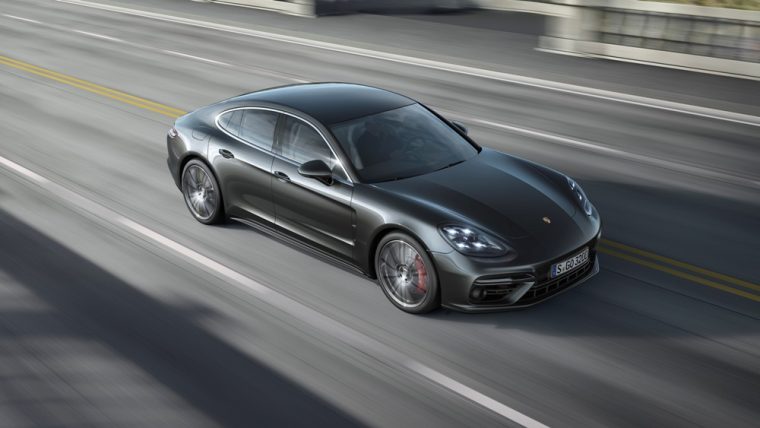 Can you spot the alterations that Porsche made to the exterior of the new Panamera?

Automotive enthusiasts around the internet seem to agree that while the new second-generation Porsche Panamera isn’t the most beautiful car in the history of the planet, it still is a significant upgrade over the first-generation Panamera sedan.

For starters, the rear roof line is 20 millimeters lower on the new model and the front fascia comes with a redesigned lower air intake that gives the front end a smoother look. The next-generation Panamera has also grown 1.3 inches in overall length and its wheelbase has expanded by 1.2 inches.

Rather Have A Coupe? Take a look at the new eye-catching Porsche 911 Carerra

As for performance, the new Panamera 4S will be equipped with a 2.9-liter twin-turbo V6 engine that provides 440 horsepower and 405 lb-ft of torque. That turbocharged motor will provide the 4S with the ability to reach a top speed of 180 mph and it can accelerate from 0-60 mph in a mere 4.2 seconds when it’s equipped with the optional Sport Chrono package.

For even greater performance, the 2017 Panamera Turbo will feature a 4.0-liter twin-turbo V8 engine that’s rated at 550 horsepower and 567 lb-ft of torque, which means the new Panamera Turbo will be able to hit a top speed of 190 mph and can zip from 0 to 60 mph in just 3.4 seconds. Also, while this new 550-horsepower V8 engine will debut in the 2017 Porsche Panamera, it will also be used in the upcoming Bentley Mulsanne and Audi A8 sedans.

No matter which engine is used in the vehicle, each new 2017 Panamera will come with an eight-speed PDK dual-clutch automatic transmission, while the 4S and Turbo models also come standard with permanent all-wheel drive. In addition, European customers will also have the option of a turbocharged diesel V8 that’s good for 422 horsepower and 627 lb-ft of torque.

The ride quality of the second-generation Panamera will also benefit from a new electromechanical power steering system. Moreover, the new Panamera will offer other advanced equipment such as an adaptive air suspension with new three-chamber technology, Porsche Torque Vectoring Plus, and active roll stabilization.

Porsche has yet to release fuel economy data for the 2017 Panamera, but the German automaker did say it expects the V6 to be more fuel efficient that its previous twin-turbo V6 offering. Also, the powerful V8 engine will feature cylinder deactivation technology, which can switch off four cylinders when they’re not needed. Porsche estimates that this new technology will make its V8 engine up to 30% more efficient.

As for the interior of the vehicle, a total of three display screens will be used to aid the driver. In the center will be a 12.3-inch touchscreen, which will be bookended by two additional seven-inch screens. This new system will be compatible with Apple CarPlay, but the official Porsche press release didn’t specify if Android Auto would be compatible or not. Furthermore, the cockpit will also feature a thermal imaging camera that will help the driver see during the night. Finally, audiophiles should be happy to hear a Burmester 3D sound system is also available with the second–generation Panamera.

Porsche has yet to release any information about a new plug-in hybrid variant for the second-generation model.

Tips And Tricks: Use these simple tips to save lots of money at the gas pump

Video: The New Panamera Turbo and Panamera 4S in Motion