This Electrified Corvette Is The World’s Fastest Street-Legal Electric 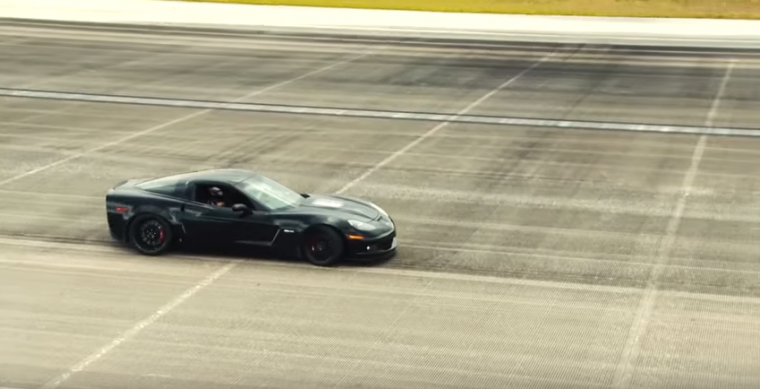 Since the Tesla Model S hit the scene, it has generated lots of attention with its Ludicrous Mode, allowing it to fly from 0 to 60 in less than three seconds. However, as exciting as that is, it doesn’t make the Model S the world’s fastest electric car.

That title goes to a Chevy Corvette. Well, sort of. It is actually an ’06 Z06 Corvette, minus its 7-liter V8, and equipped with an all-electric propulsion system capable of 700 hp and 600 lb-ft of torque. It was designed by Genovation Cars, and called the Genovation eXtreme Electric, or the GXE.

The GXE broke the record for the Top Speed of a Street Legal Electric Car on February 23rd, after reaching a speed of 186.8 mph at the Johnny Bohmer Proving Grounds/Shuttle Landing Facility in Florida. The Proving Grounds was the perfect place to challenge this record, since it features a 3-mile-long, 300-foot-wide runway. The record was certified by the International Mile Racing Association.

Previously, the record holder was a Finnish prototype car that reached 177 mph.

What makes this more impressive is that this was the first day of testing for the GXE. “We are thrilled that the result of our development testing led to the setting of this record,” said Genovation CEO Andrew Saul. “Based on our experience so far, we believe the car to be extremely robust as we set the record on our first day of testing. We fully expect the car to do a lot more.”

Genovation expects the car to have a range of 130 miles (when not tearing down runways, that is), with a near-50/50 weight distribution and low center of gravity. Interestingly, the GXE, unlike other EVs which only have one “gear,” still keeps the Corvette’s six-speed manual transmission. Check it out in action:

This e-Vette is right up Genovation Cars’ alley, as the company markets itself as a Green-Vehicle producer, with its first car, the G2, being offered exclusively as a battery electric vehicle or a plug-in hybrid with a three-cylinder range extender. It has not yet reached production, having just reached, as Genovation puts it, the “implementation phase of development,” meaning they are satisfied enough with their designs in simulations that they will now have their contractor, Tata Technologies, which is part of the Tata Group which owns automakers Tata Motors, Land Rover, and Jaguar.