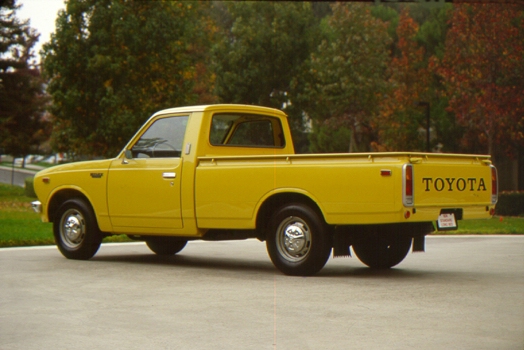 The ultra-popular British television show Top Gear seemed to have a goal in mind when it set out to quite thoroughly destroy a Toyota Hilux: prove the truck’s viability in a post-apocalyptic universe where the land is being swallowed by angry sea gods and the sky rains RVs.

Host Jeremy Clarkson spares no stone in his efforts to prove the durability of a red Toyota Hilux: it was driven down a staircase, swept out to sea, charged through a small house, battered with a wrecking ball, smashed with a falling caravan, and set on fire.

Okay, perhaps it was less a test of the Hilux’s toughness and more a shocking outpouring of Clarkson’s inner sadist.  Yet, the Hilux lived still, despite being beaten and battered worse than Ash by the end of an Evil Dead film.  Seriously, this thing gets it worse than Peter Weller in Robocop.

But like Detroit’s finest police officer (half-man, half-machine, all chin), the Hilux kept coming back for more.

Clarkson’s response?  To park the Toyota Hilux atop a tall building scheduled for demolition and depress the plunger.

The sound heard in the explosion’s wake may as well have been the thumping beat of Brad Fiedel’s Terminator theme, because when the Hilux’s engine turns over triumphantly, it’s more akin to the nightmare fuel of a T-800 emerging from flames than a truck getting ready to hit the road for a quaint little jaunt.

The end result is a truck that rolls into the Top Gear studio looking like something plucked straight out of the Mad Max universe (we love mixing our sci-fi metaphors, thanks for asking).  This experiment in punishment only serves to prove that the Toyota Hilux is capable of taking a licking and keeping on ticking.